Welcome to Margaret River – one of the most remote, beautiful wine regions on the planet, packed with five-star wineries. 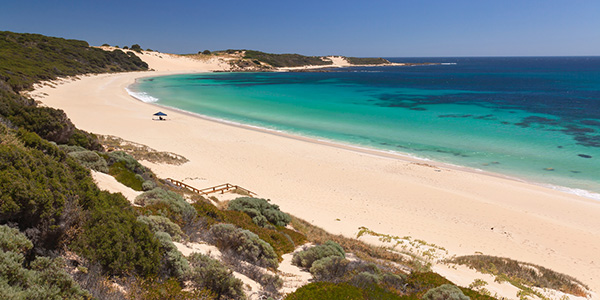 Margaret River is only at the beginning of its wine boom. In less than fifty years, the region and its troop of dedicated winemakers have built an international reputation on first-class cabernet sauvignon and chardonnay.

Situated on the rugged West Australian coast along the 100-kilometre strip between beautiful Cape Leeuwin and even more beautiful Cape Naturaliste, Margaret River is a three-hour drive from Perth and a bona fide wine haven. As popular with beachgoers as it is with wine lovers, this secluded slice of paradise allows you to sip on a refreshing glass of semillon sauvignon blanc while being treated to a blue-ribbon view.

The history of wine in Margaret River

Margaret River’s wine history began in the 1830s when the Bussell family planted their first vines to make wine for home. However, the region didn’t really take flight until two research scientists landed here in the 1950s, almost 100 years later.

Margaret River’s geographical isolation proved no problem for wine pioneers Professor Harry Olmo and Dr John Gladstone. Olmo, in particular, is one of the unsung heroes of the Australian wine industry. Despite being much less known than the likes of Max Schubert or Robert Mondavi, Olmo’s work with chardonnay in WA is what propelled the variety into the spotlight in this country.

As the Professor of Viticulture at the University of California, Olmo was invited to study the climatic limitations of viticulture in the Swan Valley. He quickly realised that the Swan Valley was not the only region in the state that would grow grapes, nor would it be the best. His work in Margaret River acted as a catalyst for what was to come.

Since then, the region has gone from strength to strength, building upon its reputation for world-class wine.

Margaret River is all about premium wine, and its expressions are consistently elegant, not to mention critically acclaimed. In the red wine category, Margaret River is best known for its cabernet sauvignon and shiraz.

Cabernet is the king of Margaret River, and almost every producer will have one on pour at their cellar door. This variety single-handedly propelled the region into the wine world’s spotlight. Today, more than 160 of the region’s wineries are making cabernet, 70 of which are five-star rated by James Halliday.

James says Margaret River cabernet is “seldom green, the flavours in the classic blackcurrant/cassis spectrum, with a juicy mid-palate then moderately firm tannins running through notes of black olive and earth to finish”.

“There was a clarity and delicacy to their red fruit flavours and an elegance in their structure which immediately set them apart.” – James Halliday

By way of whites, the front runners in production are chardonnay and sauvignon blanc. Margaret River is agreed to be one of Australia’s foremost regions for chardonnay, known for its incredible voluptuousness. James describes the Margaret River style as having “an iron-clad structure, intensity with generosity, and sweet fruit with flowing natural acidity”.

While 100 per cent sauvignon blanc is made with success here, it’s common to find it blended with semillon. Margaret River semillon is distinctly herbaceous, making it a seamless match to sauvignon blanc. As a stand-alone variety, the maritime influence on the climate sees sauvignon blanc take on an extra dimension of mid-palate flesh – not quite so tropical as those coming out of Marlborough in NZ, but refreshing nonetheless.

The climate, weather and soil of Margaret River

Margaret River has a climate that’s unique to Australian wine regions. Hemmed by water on three sides, it’s considered ‘Mediterranean maritime’. Often likened to Bordeaux, but with the added benefit of the sea, its temperatures are buffered by the Indian Ocean, Southern Ocean and Geographe Bay, resulting in mild, wet winters and warm, dry summers.

In even better news for grapes, frosts here are a rarity and the humidity levels during the growing period are ideal. The region sees an average rainfall of 1190mm per year and its lowest mean annual temperature is just 7.6°C. Vines here are privileged to a diverse range of soils, from the foundations of Jarrah and Karri forests to the sandy Jindong soils and gravelly loams of Wilyabrup. The soils are highly permeable when moist, but sloping sites quickly shed moisture, and overall water-holding capacities are low.

“The landscape varies, given character by the abundance of small creeks and gentle valleys, as well as by the profusion of native trees, shrubs and flowers. In physical terms, a degree of protection from sea wind is the most important factor.

The plantings here more or less precisely reflect the styles which Margaret River is most famous for and which suit it best. That said, cabernet merlot blends are important, as are blends of sauvignon blanc and semillon. These two blends are those of Bordeaux, and it’s no accident that the wines are as good as they are.”

Things to do in Margaret River

Besides tasting your way through every cellar door in the region, you can find a plethora of other activities to keep you busy. If you’re a beachgoer, head to one of the famous coastlines and watch the surfers going for a paddle.

If you’d prefer to stay dry, you can wander Busselton Jetty, visit Australia’s tallest mainland lighthouse at Cape Leeuwin, picnic among the Karri trees in Boranup Forest, explore the Cape to Cape track, watch the sunset at Yallingup, or see the migrating humpback whales at the point where the Southern and Indian Oceans meet.

If all your wine tasting has stirred up an appetite, have lunch at one of the region’s excellent restaurants before satisfying your sweet tooth at the Margaret River Chocolate Factory.