A start-up is selling wine by the glass, sourced from independent winemakers, and serving them in foil pouches that are significantly more sustainable than glass.

It’s a Wednesday night, you’ve pulled together an extraordinary pasta dish and the only thing that’s missing is a glass of wine. But, of course, you encounter that age-old dilemma: do you open a bottle knowing you’re unlikely to finish it, or do you simply refrain?

Incoming, A Glass Of… a platform that puts sommeliers in the driver’s seat. Asked to select five of their favourite drops, the sommeliers' chosen wines are then packaged up into handy 200ml single servings, and paired with tasting notes to complete the experience at home. Once that run is complete, they then nominate the next sommelier and so the cycle begins again.

Gabby Webster, head sommelier at Bondi Icebergs Dining Room in Sydney, was the first cab off the rank, with her selection including a pinot noir from Gippsland, chardonnay from Tumbarumba and a rosé from Mudgee. 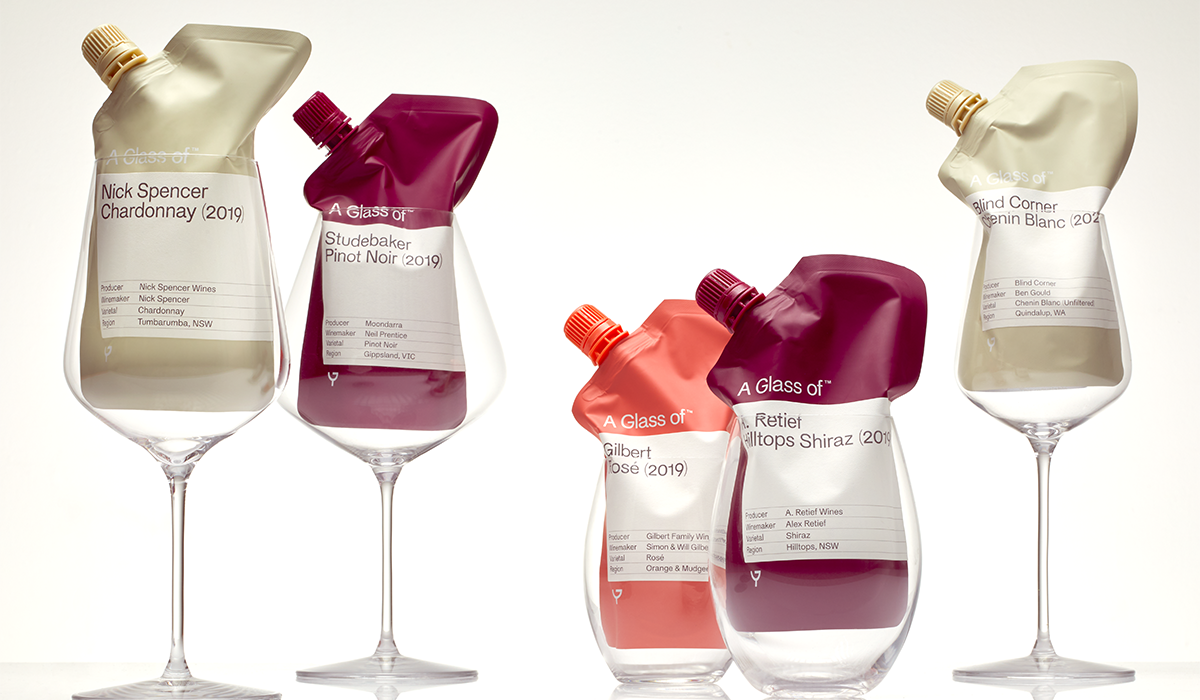 Although this concept has only been in development for the past few years, founder Paul Taylor says it’s an idea that's been rattling around his head for almost 20 years.

“People are now more accepting of innovation in the wine industry, and with the evolution of technology, buying over the internet has allowed for platforms like ours to exist,” he says. “And the way in which we consume alcohol is also changing. Take beer from my father’s generation...they used to drink it in 750ml bottles and now it’s served in bottles as small as 275ml. So, it was just about applying that principle to wine. Plus, people these days are more interested in small batch winemakers and getting to know the story behind what they’re drinking.”

Then there’s the conversation around sustainability. It's gaining importance, and for good reason. A Glass Of's foil pouches require 73 per cent less energy and 94 per cent less water to produce compared to glass, and the manufacturing process produces 82 per cent less carbon emissions.

With each box containing five pouches, it removes the guilt from opening bottles mid-week. It offers new and interesting wines, and helps support independent producers, without committing to a full bottle you may not end up liking.

“For a couple, where one person likes red and the other prefers white, rather than get divorced, they can both enjoy a glass of their preferred wine over dinner without needing to compromise,” he laughs.

As for what success looks like, Paul says it’s about getting wine lovers to connect with independent producers. "They can also better understand the story behind the wine they’re drinking and see the love that goes into making every single glass,” he says. “That’s why we include the contact details of each winemaker, so if you love one of the wines, we’re like ‘here’s their email – introduce yourself and buy a bottle directly.’”

To find out more about A Glass Of, see here.