Our southernmost state is prized for its top-class sparkling, pinot noir and chardonnay. Discover its many wine highlights here.

It’s the coldest wine land in Australia, prized for its top sparkling, pinot noir and chardonnay. Adding to that bounty, Tasmania is also spoilt with some of the cleanest air on the planet, abundant natural beauty, and super-fresh produce to pair with its crisp, elegant wines. 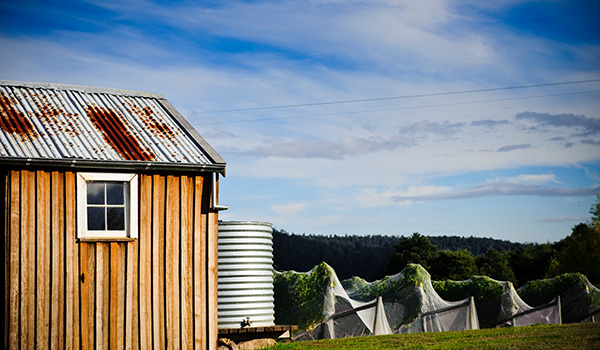 Our island state has fast made a name for itself as an Australian wine superstar, with many winemakers moving from the mainland to secure coveted vineyards or now sourcing its famously pristine fruit. From the Tamar Valley’s lush, winding landscapes to the postcard-perfect East Coast, quality abounds.

Tasmania’s sparkling wines are globally renowned, and its pinot noir, chardonnay and riesling are highly regarded by restaurants and retailers. The only catch is that these wines are in limited supply, and not all of them make it across the strait. This last point is an important one. The demand for Tasmania’s wines means an higher-than-average price, making it one of our most premium regions.

Add to that art, food and nature that people make the pilgrimage to experience, and Tasmania provides an inspiring backdrop to some of Australia’s most exciting wines.

The history of wine in tasmania

Tasmania has a surprisingly long winemaking history. In fact, according to James Halliday’s Wine Atlas of Australia, the first vines in Victoria and South Australia came from here, from Port Arthur in the south. Bartholomew Broughton planted Tasmania’s first commercial vineyard as far back as 1823, and by 1865, there were 45 varieties in the ground. Soon after, though, winemaking activity all but ceased, “due in part to the gold stampede on the mainland”, and it didn’t kick off again for nearly 100 years.
Tasmania’s modern winemaking history begins in the mid-1950s, with the Hydro-Electric Commission providing two of its pioneers – Jean Miguet, who planted the first vines in the north, and Claudio Alcorso, who followed two years later with Moorilla in the south.
Today, there is a mix of producers who call Tasmania home, from family-run wineries to new wave producers and large corporate brands. For Australia, Tasmania has become the winemaking hotspot of the 21st century, and people are vying for a piece of the pie. However, the competition for this hallowed land has prevented all but a few from moving in, keeping Tasmania’s reputation as a premium space safe.

The wine regions of tasmania


Northern Tasmania accounts for more than half the state’s output, and according to James, has “terroir and climate as diverse as southern Victoria, ripening every variety from chardonnay and pinot noir to shiraz and cabernet sauvignon”.


This subregion is responsible for the largest part of Tasmania’s wine production, with a more temperate climate than other areas of the state. While it still produces Tassie classics such as sparkling and pinot noir, its combination of warmer weather and clay-limestone soils means intensely coloured and flavoured reds are also possible.


Not far from the Tamar Valley is the Pipers River subregion, an area described by James as “undulating, forested and green for much of the year”. It makes about half as much wine as the Tamar Valley, and its soils are different, too – red volcanic rather than gravelly. Add to that a cool, Champagne-like climate, and this is a particularly good place for fizz.


The smallest and newest winemaking area of the north, this pretty spot near the coast is home to a handful of producers making stellar, cool-climate styles. Pinot noir, pinot gris, chardonnay and riesling are just some of the varieties made here.


With the base of Tasmania pointing towards Antarctica, the south is home to the coldest winemaking territory in Australia, and its combined areas make up only around a fifth of the total wine production in the state, producing some coveted limited releases.


Home to one of Tasmania’s first vineyards (Moorilla Estate), which is on-site of one of its most famous attractions (MONA), the Derwent Valley offers a range of experiences just north of Hobart. Expect elegant pinot noir, sparkling and riesling from its top producers.


Right near the Hobart Airport, the Coal River Valley is interesting in that it’s much drier than other parts of the state. Add to that sandy soils, and it’s a great environment for aromatic varieties, particularly later-ripening types. As well as the classics, cabernet sauvignon does well here.

Huon Valley and the Channel


For stunning countryside and inviting farm gates, visit the Huon Valley and areas surrounding the D’Entrecasteaux Channel. This subregion is the southernmost in the south, and super-low yields of character-filled wines reflect the location.


In terms of its wine production, the East Coast of Tasmania is similar in size to Northern Tasmania’s Pipers River. It has enticing white-sand beaches and picturesque coastal parklands alongside its cellar doors, and lovers of the outdoors will make a beeline for the Freycinet National Park and its much-photographed Wineglass Bay. The combination of the Tasman Sea and lush green country means some incredible produce, too, and you can wade in oyster farms, visit orchards, and enjoy some excellent dining.

Around three-quarters of Tasmania’s wine production is pinot noir and chardonnay, plus sparkling wine made from those varieties. Other cool-climate styles that shine here are sauvignon blanc and riesling, and areas such as the Tamar and Coal River Valleys are being recognised for richer reds, producing cabernet sauvignon, merlot and even shiraz.

A lean style with good natural acidity is typical of Tasmania. Chardonnay from the state is used for table wines, plus sparklings considered to be among the very best in the world.

Tasmania is defined by a fragrant style of pinot noir with a delicate palate. This red grape dominates the landscape, making up nearly half the state’s wine production, and it is also used in its excellent sparkling wines.

It’s only a small part of Tasmania’s wine production, but riesling from here is on the rise, with a distinctly different style to those of the mainland. Racy and pure, Tasmanian riesling comes in dry, off-dry, sweet and even sparkling styles.

Tasmania produces a fresher, more citrus-driven style of sauvignon blanc to its neighbouring New Zealand. Some wineries have also adopted the French approach of barrel fermentation.

Tasmania’s pinot gris is worth seeking out, as it often has the weight, spice, aromatics and acidity that make the best examples so flavoursome, food-friendly and complex.
Other varieties to try from here include cabernet sauvignon, merlot, shiraz and gewürztraminer.

Things to do in tasmania (and planning your trip)

The main entry points to Tasmania are Hobart and Launceston, and each is a launch pad to different attractions and wine districts. For southern Tasmania’s Derwent, Huon and Coal River Valleys, head to Hobart and prepare to spend time wining, dining, wandering the waterfront, browsing the markets and cosying up in Battery Point’s pubs. For northern Tasmania’s Tamar Valley and Pipers Brook, book your ticket to Launceston, an escape with plenty of peaceful landscapes. Launceston will also be your best jumping off point to East Coast adventures, where you can work up an appetite for fresh oysters and long lunches on kayaking excursions and hinterland hikes. It is, of course, easy enough to cover off the state by car starting at either end, depending on how much time you have.

Art lovers: don’t miss MONA (the Museum of Old and New Art) in the south.
Adventurers: the Overland Track is a favourite Tasmanian hiking trail up north.
Foodies: the produce trail in Tasmania will see picking up amazing olive oil, honey, and even wading for oysters.