Your essential guide to grenache

Grenache is a grape all grown up and on its own.

Grenache has been around since the beginning of Australia’s winegrowing history, initially used for fortified wines. But it has only recently begun to hit its stride, playing an integral role in many red blends and increasingly showing up in single-varietal styles (James Halliday even recognised an exceptional McLaren Vale example as his 2020 Wine of the Year).

If you’re testing your palate with a blind tasting, the telltale signs of grenache are the candied fruit roll-up and cinnamon hit. Medium- to full-bodied but bright in colour, grenache is packed with aromas of orange rind, raspberry, plum and tobacco. Your typical grenache boasts balanced tannins, medium acidity and plush berries, making it a crowd-pleasing wine.

Styles do vary depending on where the grapes are grown. For example, the Spanish garnacha expression that’s produced in the warm regions of the north are normally high in alcohol (around 15 per cent) and filled with ruby-red grapefruit, cherry and liquorice characters. On the other hand, French grenache from the cooler southern Rhone produces wines with more finesse and less alcohol, highlighting herbal notes such as oregano and lavender.

When we talk about pairing food with grenache, it’s all about what dishes will complement the spice in the wine. Turkey is a winner, as are other game meats such as duck. If you’re pescatarian, opt for a meaty style of fish such as a tuna steak. Don’t be afraid to bring out the grenache at a barbecue either, as it goes well with a grill. Also, if your dinner choice is heavy on the spice itself, a lighter-bodied and slightly chilled grenache can help balance the burn.

The history of grenache

Once the world’s most-planted grape variety, grenache is claimed by both Spain and Italy via the island of Sardinia, but its exact origin is uncertain. It’s an indisputable fact, however, that mutations of the grape over the centuries have led to grenache rouge, gris and blanc.

Grenache as we know it was first cultivated in the 14th century and gradually spread outwards from the province of Aragon across northern Spain and southern France. Its plantings in the south of the Rhone Valley are what set the stage for grenache in the New World, where it was first embraced by California and South Australia, and by the warmest, driest wine regions of those states. 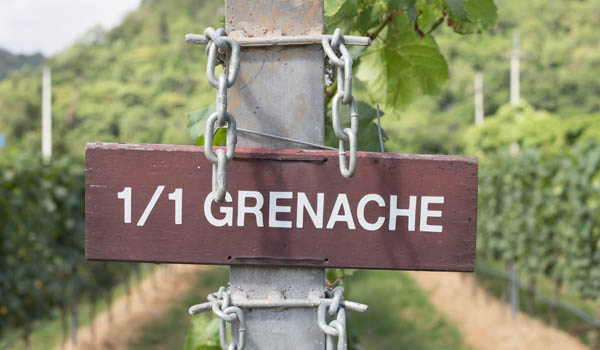 An introduction to Australian grenache

South Australia well and truly led the grenache charge Down Under. James Halliday believes the most important region, in terms of quality, is McLaren Vale, “although the vignerons of the Barossa and Clare Valleys may well take umbrage at this distinction between the three major dry-grown bush-vine regions,” he says.

Before it became known as a veritable single varietal or component in a blended table wine (think GSM), grenache was mainly used in fortified wines and was perhaps best known as the cornerstone for the production of tawny port.

This region has made a point of championing grenache, and you’ll often find industry insiders extolling its virtues. “The best examples combine density of aroma, colour, flavour and alcohol without threatening to engulf you, and they are most convincing with commensurately rich food,” James says.

With its ideal climate and wealth of old vines, grenache is one of the Barossa’s key red wine varieties. The region has had especial success with grenache in blends with its famous shiraz, which James says, “display a rich tapestry of flavours and textures”. The single-varietal styles are there and, as exampled by the Jimmy Watson win for a Barossa wine by Turkey Flat in 2017, can be wonderful, on par with those from McLaren Vale. According to James, however, these haven’t been as consistent over time.

As with McLaren Vale and the Barossa, the Clare Valley has varied terrain, rich soils and a series of microclimates. It’s renowned for riesling, but it also produces distinctive reds, among them shiraz and grenache. It does best with grenache in blends, adding complexity and savouriness.

Insights from the Halliday tasting team

James puts grenache from McLaren Vale on par with some of the world’s greatest, saying it is “not merely Australia’s best, but every bit as good as that of the Rhone Valley”.

Ned Goodwin MW loves grenache and McLaren Vale, which is one of his regional focuses for the Companion, but he has a particular penchant for southern French styles.

Meanwhile, Tony Love recently investigated the rise of this crowd-pleasing red for Halliday magazine, and found it thriving and with fans around the country. Check out some of his standout wines and access the full story digitally or in print.

The two world regions most famous for grenache can be found in France: Chateauneuf-du-Pape and Cotes du Rhone. According to James, the Chateau Rayas – made from 100 per cent grenache – is the ultimate achievement and expression of the variety. The wine has exotic aromas and flavours and is sweetly spiced, featuring forest berry, tobacco and liquorice.

Cotes du Rhone is a vast appellation with a viticultural history stretching over 1000 years, of which grenache is the dominant variety. The hallmark of all Cotes du Rhone wines is sheer drinkability. While the fruit is there in abundance, the tannins are soft. James says: “This is a wine which Australians instinctively understand… and the overwhelming majority of the Cotes du Rhone wines brought into this country are from the top echelon of producers.”