It’s the most widely planted variety on the planet and one of the great vinous success stories. Get to know cabernet sauvignon in our essential guide.

Cabernet sauvignon is a truly noble red wine. Originally from Bordeaux in France, the popularity of this varietal was such that there were soon plantings worldwide.

Cabernet sauvignon is often blended with varieties such as merlot and shiraz, but straight-up examples are nevertheless worthy of a place in any wine lover’s cellar. That’s partly to do with its complex flavour profile, but also because it’s one of the most ageworthy wine varieties.


In comparison to other noble wine varieties, cabernet sauvignon had a relatively slow start, only emerging in the late 18th century when the grape is believed to have formed due to a spontaneous crossing of cabernet franc and sauvignon blanc. This variety is particularly partial to the growing conditions offered by the alluvial soils in Bordeaux and is the classic red grape of the region. 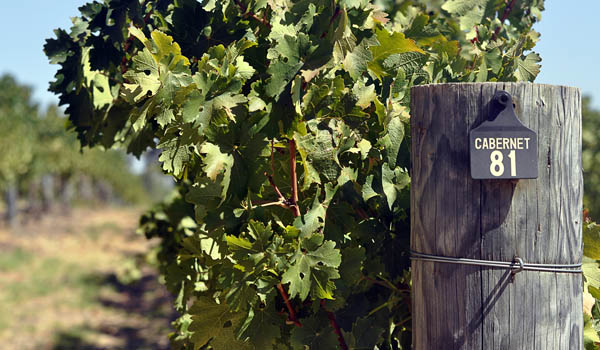 Today, cabernet sauvignon is the world’s most widely planted wine grape, grown across Eastern Europe, cooler regions of Italy and parts of Spain. It is also spread across the Southern Hemisphere, in Australia, Chile, Argentina, New Zealand and South Africa.

Cabernet sauvignon found its way to Australian shores thanks to James Busby, a wine pioneer who imported the grape in 1832. The first crops were used for blending, but winemakers and viticulturists were quick to embrace cabernet sauvignon as a variety in its own right.

French cabernet sauvignon finds its greatest expression on the Left Bank of the Gironde River, in the Haut-Medoc and Graves appellations of Bordeaux. Modern viticultural methods and improved wine technology have changed the dynamics of making Bordeaux reds based on cabernet sauvignon. It’s a style that is always evolving.


The production of cabernet sauvignon in the US is most prolific in the Napa Valley, Sonoma and Washington State regions. In the Napa Valley, cabernet mirrors the heroic style of black fruits, firm tannins and copious oak, with growth in the use of French oak over American. Washington State cabernet sauvignon tends to fall into one of two camps: either ripe and fleshy, or bony and lean. The wines that occupy the middle ground are often softened with merlot.

Much like Australia, Argentina is home to a diverse climate and terroir. It has more than 15 provinces, each of them producing world-class wine. Mendoza takes the spotlight as the centre of Argentina’s production, with excellent cabernet sauvignon that’s supple, textural and with clear varietal character. It may then seem slightly odd that cabernet sauvignon is not the most widely planted grape in the region – that honour goes to malbec.

Chile has significant plantings of cabernet sauvignon, many with their original roots as phylloxera never spread in this country. According to James Halliday: “Chilean cabernet sauvignon is usually soft, accommodating and with excellent colour – and cheap. But there is an increasing number of super-premium wines made in small quantities from old vines and on trellised hillsides”.

When discussing NZ cabernet sauvignon, two names tend to come up: Hawke’s Bay and Waiheke Island. Te Mata in Hawke’s Bay has been the pack leader since 1982, offering top cabernet blends. The influence of global warming, a 1998 vintage and the formation of the Gimblett Gravels wine-growing district have changed this perception. Waiheke, on the other hand, has a unique climate that while producing outstanding wines, has the downsides of smaller volumes and higher prices.

The bout for the title of Australia’s premier cabernet region is a tussle that has long been contested by Coonawarra and Margaret River. While it is a question that may continue to divide wine drinkers for years to come, the answer really comes down to preference. That is despite the fact Team Coonawarra has history on its side, planting its first cabernet vines in 1893, more than seven decades before Margaret River began its production.

Coonawarra has rich, red soils and a warmer climate, whereas Margaret River has a mild, almost Bordeaux-like climate. Margaret River subsequently produces a cabernet that is richer in flavour and slightly more rounded than its South Australian rival. But Coonawarra fans can’t go past its cabernet’s trademark dark chocolate and mint characteristics.

Discover the different cabernet styles and characters that come out of Australia’s leading cabernet-producing regions.

A majority of the grapes grown in Coonawarra go into varietal wines. Expect a medium-bodied style with a supple palate and balanced tannins. The range of fruit flavours in the wine is largely influenced by the vintage and winemaker, covering cassis, blackcurrant, redcurrant, blackberry and mulberry in youth, developing into distinctive earthy, savoury and spicy characteristics with age.

Margaret River’s history of producing top cabernet sauvignon is relatively new, stretching back a little more than 50 years, so how it has emerged as a cabernet powerhouse can be attributed to the environment being one of the best in Australia for producing this varietal. A Margaret River cabernet’s style will differ slightly depending on its subregion of origin, including variations in texture, weight and mouthfeel as well as flavour.

Some of the greatest wines of this region (notably those pioneered by Penfolds’ Max Schubert) have used cabernet as a part of a blend with shiraz. James Halliday says of Barossa cabernet: “In cooler vintages, it features rich and ripe fruit, which provides an ample base for the confident use of oak; the result is an easily accessed and enjoyed wine, which will repay with cellaring.”


Cabernet sauvignon is suited to vintages that are temperate across the growing season, as it is a later-ripening variety. That means site selection in Victoria’s Yarra Valley is all-important. When at its best, a Yarra Valley cabernet has a blackcurrant aroma with a supple, silky texture and fine tannins.

Langhorne Creek often gets overlooked in discussions of Australia’s best red wines, and that’s a shame, as flowing from its wineries are some exceptional examples. The quality of its red fruit is so great, in fact, that neighbours such as the Barossa Valley look to it as a wellspring for their wines. Cabernet was first planted in this region in the 1800s by Bleasdale founder Frank Potts, and it has been producing flavoursome cabernet with red and black fruits and herbal complexity ever since.

Cabernet sauvignon is known for its deep colour, firm structure, rich fruit and herbal notes. Often tannic in its youth, this is a wine that improves with age and typically hits peak drinkability after three or four years. When tasting blind, you can sometimes tell a cabernet sauvignon by the ‘doughnut’ effect it can have on the palate – filling out the mid-palate is one reason it’s popularly blended with varieties such as shiraz and merlot.

Cabernet sauvignon has aromas of cedar, cassis and currant, and often a defining hint of mint. It is also known for a green capsicum note attributed to an organic compound group called pyrazines.

To compare the characteristic variations between Old and New World cabernet regions, the grapes from Bordeaux provide a herbal base, with flavours of graphite, violets and tobacco. In contrast, cabernet from California is more fruit-forward, with black cherry, liquorice and a touch of vanilla.

Cabernet sauvignon is a wine that cries out for food. Thanks to its acidity, tannins and alcohol, if there ever was a variety made better by a feast, it’s cabernet. A rich meat dish is a perfect pairing. Think a favourite cut of steak or a slow-cooked beef ragu. Hard cheeses, like an aged gouda or cheddar, also match well to cabernet.


All quotes and facts in this guide are from James Halliday’s Varietal Wines.