House of Arras in Tasmania, an award-winning producer of sparkling wines, has released its inaugural vintage collection, a set of five wines that aims to educate Australian drinkers on the quality of local fizz, and that places it in the league of top-shelf Champagne.

It’s the first time the stars have aligned for winemaker Ed Carr to disgorge a selection of House of Arras vintage sparkling wines to exhibit at one time, and for drinkers to pop the top on bubbles that show Australia’s potential to create exceptional, celebratory styles.

The quintet of wines shares one important trait – the length on tirage. To explain, tirage is the process by which still wines become sparkling. A solution of yeast, wine and sugar is added to the base wine in a closed environment (which in the traditional method is the bottle that goes on to sale) to create a secondary fermentation, and the longer that is left, the more complexity that can show up in the resulting sparkling wine. (Think of the ‘bready’ or ‘biscuity’ characters often noted of Champagne – that’s thanks to extended time on tirage and contact with its yeast lees.)

The lees ageing of House of Arras’s vintage collection starts at a minimum of nine years for the Rosé 2007 and the Grand Vintage 2007 magnum, and rises to 13 and 15 years respectively for the EJ Carr Late Disgorged 2004, the EJ Carr Late Disgorged 2003 magnum and the Museum Release Blanc de Blancs 2001, creating a series of wines with superb richness and texture. It’s an expensive and labour-intensive process to craft aged sparkling wines of this calibre, and it’s a credit to House of Arras that it homes such a collection. 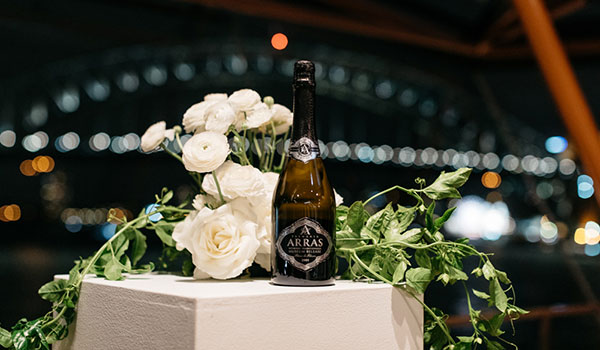 At a recent event to launch the collection at the Sydney Opera House, attendees were surprised to learn of the age of these wines – especially the Museum Release Blanc de Blancs at an astounding 15-years-old. To give you an idea, vintage Champagne has a minimum lees-ageing requirement of three years, so this wine jumps that bar by quite a bit.

“The 2001 Blanc de Blancs is one of the most expensive products Arras has brought to market, but we absolutely believe that it’s worth the price,” Ed says. “Last year, it picked up the Best Australian Future Release at the Champagne & Sparkling World Championships, and this year it won Gold at the same awards,” he adds.

Another factor that plays into the quality of House of Arras’s sparkling wines is their provenance. Tasmania is one of Australia’s top cool climate regions, with consistently favourable conditions for fruit development. It has the edge over vineyards in places like, say, France, which can be prone to frosts and other weather extremes.

If you’re considering something special for the festive season, why not try Australian sparkling? With releases such as these, you’ll find the wine in the bottle to be world class.


House of Arras are pleased to announce the launch of the EJ Carr Wine Club. To be one of the first to access these limited releases, register at houseofarras.com.au/wine-club.