A wine auction for a worthy cause

Australian wine lost one of its brightest stars in May – Tasmanian vigneron Vaughn Dell. Now, a wine auction is raising funds for his family and the stellar winery he co-founded, Sinapius.

It was soon after discovering the Sinapius Esmé at a Melbourne bar that I interviewed its maker Vaughn Dell. At the time, this wine – named after one of his two young daughters – was a gamay blend, although it’s since become a straight gamay. The Esmé was deliciously light, bright and moreish, but there was so much more to it than my simple description suggests. We ordered a second bottle. I wanted to know who made it.

This was several years ago, and when I spoke with Vaughn, he had already been tending his vines in Tasmania’s Pipers Brook (pictured above) for more than 10 years. This young winemaker and his wife Linda Morice had jumped into their own project and bought their site when they were just 24. Vaughn talked with passion and purpose about the varieties and clones they had planted, their particular love for Beaujolais and gruner veltliner, their young family (the girls liked to keep tabs on which of their namesake wines sold more at cellar door), and what came next.

In May, however, Vaughn died suddenly at the age of 39, and Australian wine lost one of its brightest stars. Now, Langton’s is hosting a wine auction to raise funds for Linda and their girls, as well as the Sinapius business, with almost 300 lots listed. The incredible wines, including magnums and double magnums, have been donated by top producers from around Australia, as well as France, Italy, Spain, Germany and Austria. From a 1966 Wynns Coonawarra Estate Hermitage and back-vintages of Rockford Basket Press Shiraz, to a 2013 Domaine Armand Rousseau and many other more accessible wines, it's a special selection. 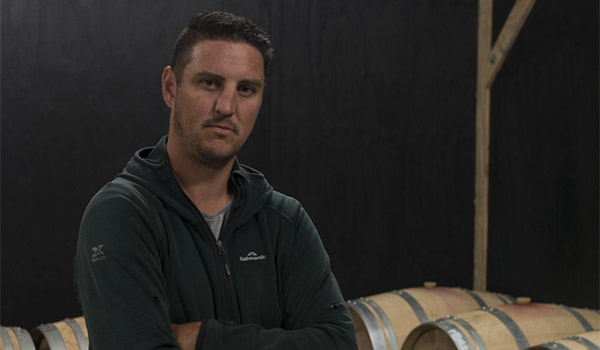 Vigneron Vaughn Dell of Tasmania's Sinapius passed away in May.

Organised by Tony Nowell, who distributes Sinapius under his Moor St Wines business and counted Vaughn as a close friend, the auction aims to help in various ways. “My motivation was initially to raise money to enable Linda to educate Esmé and Clementine wherever she chooses, and release Linda of any financial pressure,” Tony explains. “But I quickly realised that any money raised would also help Linda to pay for people to do Vaughn’s work.”

As Tony says, Vaughn did a “power” of work. “He made the wines, designed the labels, rebuilt the cellar door and winery, ran the bottling line, managed the viticulture, dealt with the distributors, poured his wines at trade tastings and for cellar door visitors, and he was also a great father and husband. He made sure he attended all of his daughters’ basketball games and other sporting endeavours. I’m not actually sure how he had the time to do all this,” Tony says.

The auction is now live and runs until Sunday, July 26. To browse the wines in the Vaughn Dell Family Fundraiser, visit Langton's, and to learn more about the Tasmanian winery, go to Sinapius.

Amelia Ball is the editor of Halliday magazine.