Your last wine. Any label or vintage you want. What would you choose? That’s what we asked some of Australia’s top producers, and here we share the choices of vigneron Michael Dhillon from Victoria’s Bindi.

The legendary Andre Simon, one of the first great people of wine, said that “a man dies too young if he leaves any wine in his cellar”. The wine merchant and writer passed away in 1970, in his 90s, with just two magnums left in his once-extensive cellar. In 1977, some 400 guests assembled at the London Savoy to celebrate what would have been his 100th birthday with one of those magnums (by the thimble?) – a 1945 Latour. It’s been suggested that Andre passed away because he was down to his last bottles, and the best chance for immortality is a full cellar.

When we asked some of Australia’s top producers what they would choose as their final bottle, some were horrified, thinking the exercise too morbid, while others jumped in. We thought it only fair to allow them one of their own wines, as well as the most special bottle in their cellar or the one that still eludes them – their ultimate desert-island wine. It provided some wonderful insights into their personalities. 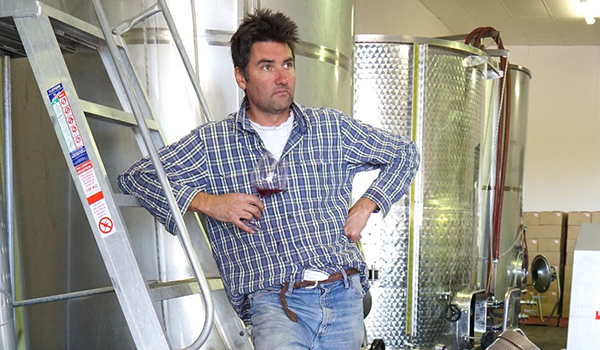 Winemaker Michael Dillon (above), responsible for some of our finest chardonnay and pinot noir from Victoria’s Bindi, has some beautiful stories behind his choices. “The 1991 Bindi Chardonnay was our first crop from the 1988 plantings and produced 896 bottles from three barrels. The attention to detail in the vineyard by my father Bill Dhillon was obsessive, and the picking and sorting by family and friends fastidious. The wine was made by John Ellis at Hanging Rock and was pure, balanced and a revelation from young vines. The vineyard was planted soon after my mother Kaye passed away,” he says.

“The notion that we could grow vines successfully on this land that came from my grandparents, and that this land could make such a beautiful wine that remains alive and delicious today as we commence our 30th harvest, is startling and emotional. We have eight bottles left and treasure them dearly. They carry the image of Kostas Rind, a Lithuanian academic who came to Australia as a refugee. My father came from Punjab in India to school in Australia in 1958 where Kostas was a teacher who influenced his life profoundly. This 1991 Chardonnay ties in the land where we live and farm, generations of my family and mentors, and the possibilities wine gives us in life.”

Michael’s desert-island wine was almost certainly going to be Burgundy, and Jayer it is. “The 1982 Henri Jayer Vosne Romanee 1er Cru Beaumonts rests quietly in my cellar and occasionally whispers to me ‘It’s time’. But it never quite seems to be,” he says. “My mentor, sage winemaker and father-figure Stuart Anderson arrived on Christmas Eve many years ago with a bottle in a bag and said, ‘Put this aside to drink with Wendy’. Later, when the guests had departed and the children took their restless Christmas Eve sleep, I opened the bag to discover this rare and deified treasure.

“I have had many stunning bottles from the late Henri Jayer, the godfather of modern Burgundy and pinot noir, but today they are so rare and celebrated I suspect my experience ahead might be delimited to but one more. The story and connection of a bottle in the cellar becomes as valuable as the contents themselves. Wine may be made to drink, but great wine with great stories become time capsules of people and places, relationships and emotions that transcend the liquid itself.”

It’s impossible to put it better.