Sessional, flavourful beers that stand the test of time – Phil Sexton is ready to finish what he started.

The Australian beer industry has a lot to thank Phil Sexton for. His microbrewery, Matilda Bay, pioneered craft beer when it was established over 35 years ago. Now, after his success with brewery Little Creatures, and wineries Giant Steps, Devil's Lair and Innocent Bystander, Phil’s nostalgia for the label will see its resurrection in Healesville, Victoria. 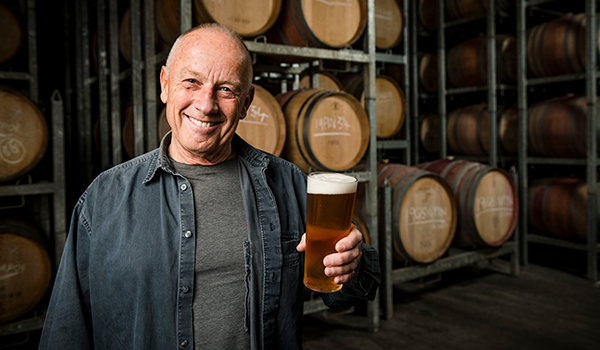 “I founded Matilda Bay in 1983 to give drinkers beautiful craft beer,” says Phil. It was slow going back then, with the majority of consumers partial to a state-based lager. But then Phil got his big break with a pub in Fremantle that saw his English ales, mainstream pilsner and wheat beer styles become local favourites.

Fast-forward 36 years, and Phil is one of the biggest names in microbrewing and wine in the country. After Matilda Bay was fully acquired by Carlton & United Breweries in 1990, he continued on to found Little Creatures brewery and wineries Giant Steps and Innocent Bystander.

But Phil’s original label still holds a special place in the consciousness of Aussie beer-lovers. “Restoring Matilda Bay to its’ rightful place as Australia’s leading craft beer is unfinished business for me,” he says. The new site will be in Phil’s hometown of Healesville, “this is also about creating a beautiful new attraction in the town I love and live in. There is something so special about drinking great small-batch beer where it’s brewed,” says Phil.

Part-brewery, part-pub, the new iteration of Matilda Bay brewing will pay homage to its original roots, but with a fresh face. Construction is expected to start in a few weeks and will take place on the current Giant Steps site (with a new location for the winery to be announced in the coming months).

Though Matilda Bay is still owned by CUB, this venture will be entirely Phil’s. “[Phil] will oversee everything from brewery construction to brewing and marketing,” says CUB CEO, Peter Filipovic. “He is a craft beer visionary who revolutionised Australia’s beer landscape. There is no one in the world more suited to delivering this venture than him,” says Peter.


Phil hopes to solidify Matilda Bay’s future with a conscientious focus on sustainability. Making the brewery as environmentally friendly as possible will be a critical part of the project, with solar panels supplying power and all waste to be recycled. The brewery will use Healesville pristine water.