Prominent producers speak to this often-maligned varietal and its incredible potential.

If there’s a single glass of wine you can put your nose into and instantly identify, it’s sauvignon blanc. As Jason Flowerday of Marlborough’s Te Whare Ra says, it’s a complex grape variety. “It makes very good quality wine, but it’s very fortunate that it can make quaffable, approachable wine as well,” he says.

Marlborough, a vast region at the top of New Zealand’s South Island, put sauvignon blanc on the map last decade and claimed the grape as its own. The region consistently produces a crisp, refreshing, dry white with easily identifiable flavours of gooseberry, passionfruit and tropical fruits that ticks plenty of boxes – generally for under $20 a bottle.

That’s often where the sauvignon experience starts and finishes, with people unwilling to explore its more serious side. “People don’t tend to look for alternative sauvignon blanc styles,” says Peter Nixon, who heads up range development at Dan Murphy’s. They either stick with those familiar flavours or move on to different wines. “The people who are jumping off sauvignon blanc aren’t asking, ‘What’s another sauvignon blanc style around the world I can get into?’ They’re looking for something else,” Peter says. What they’re missing is a serious wine. Care in the vineyard and a few winemaking techniques elevate sauvignon blanc from a $15 bottle commodity to a wine of complexity, that’s food-friendly and capable of ageing.

“It’s a very serious wine,” says Xavier Bizot, vigneron and winemaker at Terre à Terre in South Australia’s Wrattonbully. “In my opinion, sauvignon has the advantage over riesling – the aromatics, the finesse, the elegance – but you can also make it in oak and give it a bit more texture. Generally, with riesling to get texture you leave a bit of sugar, but with sauvignon blanc you can give it oak and it works really well.”

QUALITY STARTS IN THE VINEYARD

There’s a saying that good wine is made in the vineyard, and while terroir isn’t a word often associated with sauvignon blanc, there are many things that can go wrong with the grape. It’s susceptible to disease, as well as large crops that dilute its flavours and green characters when picked too early. “Good-quality sauvignon blanc has to start in the vineyard,” Te Whare Ra’s Jason says. “By putting that extra effort in the vineyard and growing it a certain way, you can develop a certain flavour.

I think that’s probably where a lot of things have been let go, and the more focus we put on the vineyard allows us to have more expression of what we can then do with these sites and places.”

Jason acknowledges that he’s seen a lot of shortcuts taken in growing grapes in Marlborough. “The downside of that is seeing green fruit, rather than seeing a real ripeness,” he says. “We’ve got a fantastic climate and Marlborough can allow for that full ripeness and still retain the acidity, but it’s getting the acid to be nice and ripe, rather than green. That gives you a juicy palate and a lot of ageability and drinkability.” 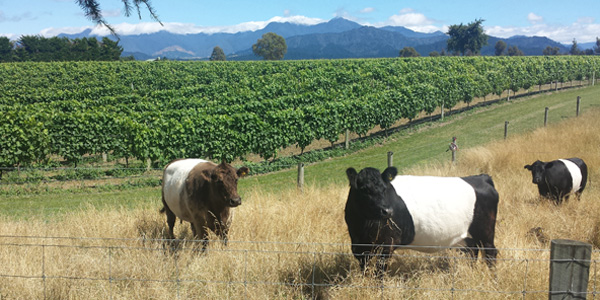 Shortcuts can be taken because sauvignon blanc is easy to grow and can produce a prodigious amount of grapes per vine. “It grows like a weed, but the problem is that it’s vigorous and over-crops,” Tim Shand of Punt Road says. “To give you an idea, pinot noir will crop at two and a half tonnes an acre in the Yarra Valley. Sauvignon blanc will happily crop at 16 per acre and you won’t even notice it because the bunches are small.”

“By and large they’re small bunches and they’re really tucked into the canopy, which makes them hard to pick – expensive to pick,” says Martin, who has released the 28th vintage of Shaw + Smith Sauvignon Blanc. “We’ve always hand-harvested our sauvignon, and we’re probably one of the few companies that do. It adds an extra $550 or $600 a tonne, so there is a massive differential in costs, but for me the quality ramifications of hand-harvesting justify that expenditure.”

“All the aromatic characters of sauvignon blanc, just like in the classic varietal wines such as riesling, are in the skins,” Xavier says. “If you whole-bunch press you actually work more on the flavours in the pulp, which are the core fruit flavours, not the aromatic side, giving you a deeper, more powerful wine that has the potential to age.”

Fermenting in oak barrels, which tends to occur at higher temperatures than the alternative stainless steel tank, also makes a difference to the finished wines. “The warmer temperature gets rid of all the volatile aromatics. The smell in the winery when it’s fermenting is amazing [during this process]. At the end you’re left with the core fruit of the variety.”

Barrel fermentation also adds texture, says Johnno Harris who makes a fumé blanc – a textural, slightly smoky sauvignon blanc – at Mitchell Harris Wines in Victoria’s Pyrenees. “For something with texture and body, barrel fermentation is the way to go,” Johnno says. “They’re much more versatile as a food match. Everyone likes having a sauvignon blanc on their wine lists, but it tends to be mashed up with food. I think barrel-fermented, fumé sauvignons are more versatile.”

Regionality and terroir – the French concept of climate, soil and winemaking combining to make wines that speak of their place – is now becoming a focus of sauvignon producers.

“There are a few of us in Marlborough who are exploring the sub-regions a lot more, and trying to really delve into what the interesting parts of Marlborough are, rather than just getting one big regional blend,” Jason says.

“We’re moving away from that commodity-driven thing and revealing another side of what sauvignon blanc can be. We’re showcasing fruit quality, rather than just offering an oak alternative to what is currently on the market.”

Best known for chardonnay and pinot noir, Yarra Valley producers are starting to make their mark with sauvignon blanc – a variety that was first planted in the region in the 1960s.

A combination of old vines and cheap prices are giving younger winemakers a chance to produce wines under their own labels. “I think that resource is getting more respected and it gives some of the young guys a chance to actually do something different,” Tim says.

“To be honest, everyone in the Yarra is making chardonnay in exactly the same way. There’s not a lot going on outside of a couple of weeks of picking time. The pinot noir is the same; the timing of vintage, the clones, the yeasts... Sauvignon blanc, however, is a bit of a blank canvas for the guys who have started recently and are looking to produce something unique.”

This article originally appeared as 'Sauvignon factor' in issue #37 of Halliday magazine.