Considering the cask: the Australian icon making an impressive comeback

Meet the winemaker, entrepreneur and sommelier determined to change the way we buy wine by embracing the cask.

Cask wine. It is distinctly Aussie. It was invented in South Australia in 1965, but doesn’t have the best reputation, thanks to the mass-produced sweet wines that helped make it popular in the 1980s (remember the Tropicana wine cooler in a juice box?).

But that doesn’t mean you can’t find wines that are sustainably produced, eminently drinkable and wrapped in aluminum, which is why we tracked down three trailblazers to find out why they’re intent on bringing cask wine back into the spotlight.

“It’s all I could afford to do,” says Marcus Radny of Mornington Peninsula-based label Gonzo Vino of his decision to pack his inaugural release into 500ml aluminum pouches. “But it’s still a wine as good as I could make – we’re not taking any shortcuts.”

Marcus – who became head sommelier at Melbourne’s celebrated Vue de Monde at the age of 21 (he’s now 28), and has curated wine lists for uber-luxe resort chain Aman – managed to get his hands on some single-vineyard pinot noir grapes, which he took to his mates at Quealy, where he learned the ropes on the go.

That fruit equated to 2000 pouches of rosé – 100 per cent pinot noir, free-run saignee, unfiltered and minimal sulphur – and 36 clear-glass riesling bottles, which he’s using for monthly comparative tastings to make sure there’s no loss of quality. “Even though it’s in a bag, not in a bottle, it’s still a high-quality product,” Marcus says. 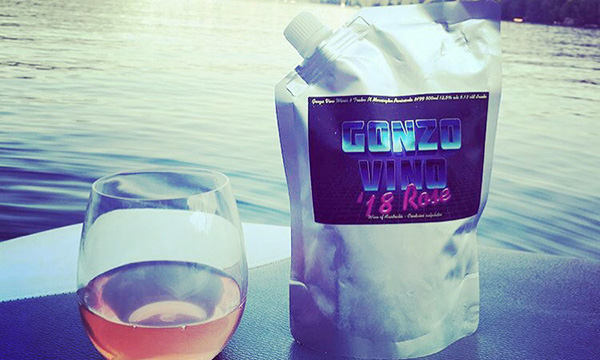 This ‘drink now’ style of winemaking is good for young producers – there are fewer overheads and an almost immediate return on investment, plus lower shipping and storage costs. Marcus’s 100 per cent recyclable pouches weigh just 13 grams each, which means you’re paying for the wine, not the bottle. “I could make wines designed to age, but this is a new business and cashflow is king.”

He used the proceeds of his first vintage to upscale and is growing his own fruit on a 6.5-acre vineyard in Cape Schank, which he describes as being “about five acres too much for one person”. His 2019 wines hit the market in August, and his second vintage is bigger and better, with another rosé (sangiovese and shiraz this time), a white field blend, and a straight shiraz – all minimal intervention, wild fermented and hand pressed.

Despite increasing production five-fold, Marcus is committed to his trademark pouch. “Glass in Australia doesn’t really get recycled, but aluminum, well, you can turn that into anything, from a beer can to a fridge.”

Entrepreneur Chloé Oestreich’s heart lies in the art world. She’s the brains behind the brand Pord, which is less fancy-cask-wine and more limited-edition artwork that happens to have a three-litre bag of wine inside it.

“In bottle shops, I noticed my friends choosing attractive labels over staff recommendations,” Chloé says of the inspiration behind the project. “Then they’d drink the wine and throw away the very reason they bought it in the first place.”

Cost of entry is steep – they’re $160 – but you’re really paying for the multi-purpose container, of which there are three to choose from, including a pastel-toned number by Sydney-based artist Evi O.

For Chloé, her Pord system is much more than a way to store wine until you consume it. In fact, the only thing you can’t do with it when it’s empty is refill it with more wine. “It’s a vase, it’s a cookie jar, it’s in my pantry filled with pasta. One customer drilled a hole in it and turned it into a lamp shade, another turned it into a pot holder.” 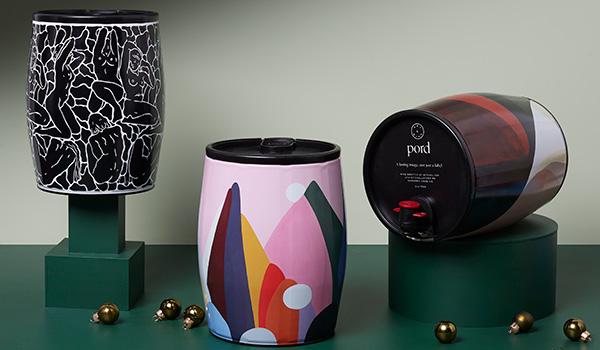 The featherlight aluminium casing houses a three-litre bladder of wine that Victoria’s Mitchelton produced under contract, although it’s not the wine this winery sells under its own labels.

Pord launched with three wines in the 2018 release – a rosé and pinot grigio, which have since sold out, and a shiraz – each designed to be consumed within a year. Chloé says the vessel keeps the wine for up to six weeks after opening, particularly if you keep it chilled, and she is open to the possibility of future Pord releases containing spirits as well as wine.

A 10-litre box of orange wine might not sound so consumer friendly (imagine finding the space for it in your fridge), but retail isn’t the primary focus for Sydney wine director James Hird.

He teamed up with winemaker Owen Latta to produce Owen’s Big Orange, an organic field blend of mostly white grapes from Victoria’s Pyrenees, to sell at Icebergs, Bondi Beach Public Bar and the Dolphin Hotel for less than $10 a glass – impressive by Sydney standards – or takeaway for $200. 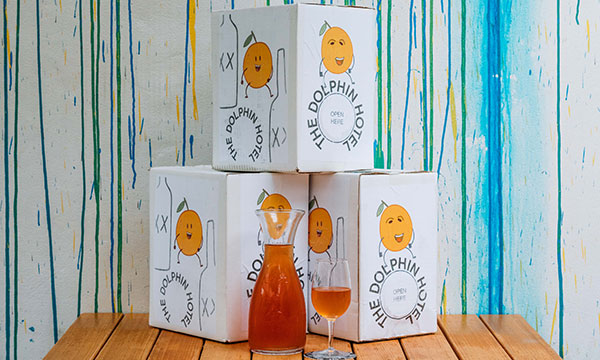 It’s the second release for the hospitality group, after importing a biodynamic barbera-in-a-box last year to combat rising wine prices and reduce waste. The Big Orange saved 1400 empty bottles from the bin in its first two months alone. “Whether it’s cask or other formats, we need to look at ways of making wine packaging more affordable and reducing the footprint of production,” James says.

He says their bag-in-a-box wines have been so popular the group is now on its second batch of the orange wine, with a rosé set to land in time for summer. “Glass has too many fragility issues to be the long-term solution for everyday drinking,” James says. “I like that wine is accessible and people have a lot of options when they walk up to the bar. Wine should not always be an elite offering.”

Made from 60 per cent sangiovese and 40 per cent shiraz, this new rosé follows last year’s inaugural bright, spicy and dry release.

A full and mouth-filling style of Heathcote shiraz, with layers of plum, blueberry and spice.

Big Orange Pyrenees, Victoria
10 litres or by the glass

This field blend is available by the glass – or in 10-litre boxes – at Sydney’s Icebergs, Bondi Beach Public Bar and the Dolphin Hotel in Surry Hills.

This article features in the latest issue of Halliday magazine as 'Out of the box’. Pick up a copy today or become a member to get every edition first.