A glamorous wine region by the sea

The boutique wineries, top dining, and picturesque landscape combining tidy vines and rugged beaches are part of the Mornington Peninsula’s charm, and there’s so much more too. Learn about what goes into the Mornington Peninsula’s wine – with a particular focus on pinot noir and chardonnay – as well as everything else there is to experience in this popular Victorian region with our essential guide. 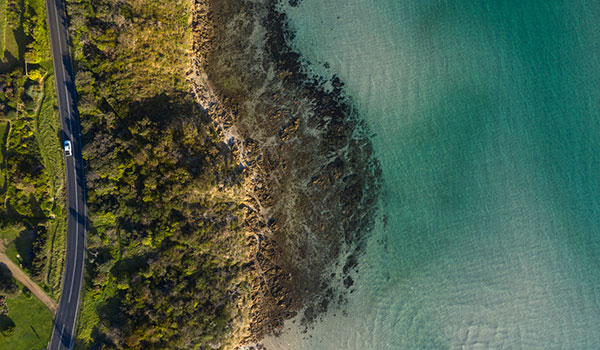 Welcome to the mornington peninsula

This pretty enclave of pebbly beaches, polished vineyards, meandering back roads and highly rated restaurants is only an hour south of Melbourne, and as a favourite spot for seachangers and holidaymakers, it’s a place that’s built on dreams.

In James Halliday’s words: “The sheer beauty of the softly rolling hillsides, the green grass of much of the year, the white-railed horse studs, the groves of native and imported trees, and the sweeping sea vistas are a perfect backdrop for visitor or resident alike.”

The history of wine on the Mornington Peninsula

The Mornington Peninsula is a relatively young region, but that hasn’t stopped it from achieving a lot in a short amount of time. Today, this tiny section of southern Victoria is home to some of Australia’s great vineyards.

According to James, the Mornington Peninsula has had a stop-start history with wine since the late 19th century, but it wasn’t until the 1970s that there was “rapid and continuing growth”. For the most part, this momentum came via well-off professionals with a passion for wine contributing small, independent vineyards with the capital to thrive. “The affluence of the majority (though by no means all) of the vignerons means they have not hesitated to spend the money necessary to acquire the human and material resources to maximise wine quality and guarantee consistency,” James says. “It has also resulted in the establishment of numerous attractive cellar-door facilities, plus many winery restaurants and cafes.”

Baillieu Myer, son of Sidney Myer, the founder of the eponymous department stores, was one of the first major investors in the region, planting the Elgee Park vineyard in 1972. Bails, as he’s known, has been a hands-on participant in the running of this pioneering winery and amazingly, at more than 90 years old, he still oversees its harvest today.

The first commercial winery followed with Main Ridge Estate, which was then run by Nat and Rosalie White. The couple took a punt on a lemon orchard and a largely untested wine area, and more than 40 years later, the winery is an icon of the region with consistently excellent wines.

A newer addition that examples the influence of career changers in the region is ex-engineer Darrin Gaffy’s Principia winery, which is the reigning Dark Horse of the Year.

While the region has been propelled forward by prominent figures such as Baillieu, determined individuals like Nat and Rosalie, and dreamers like Darrin, there is a mixed bag of others shaking things up, including savvy young entrepreneurs and next-generation winemakers pushing the boundaries of the traditional varieties and styles. All up, the region now houses more than 100 wineries, 50 cellar doors and 200 vineyards.

With the Port Phillip and Western Port Bays on either side of the Peninsula, and the wild waters of the Bass Strait in front, this region enjoys a maritime climate that’s ideal for growing character-filled chardonnay and pinot noir.

The cooling breeze that blows off the surrounding waters is a blessing for the region’s winemakers in minimising disease pressure, and the diversity of dirt under-vine helps them to produce varied and distinctive styles (the three main soil profiles on the Peninsula are sandy, red volcanic, and yellow and brown over clay). There are also many microclimates found across the region’s sites, which casts the net of possibilities wider still. Generally speaking, however, the further you go south, the cooler the vineyards become (thanks to the Antarctic waters of the Bass Strait), and those in the north tend to be warmer.

The stars of the Mornington Peninsula are pinot noir and chardonnay, with pinot gris/grigio another champion and shiraz a wine on the rise.

The undisputed hero of the Mornington Peninsula, this delicate, complex red wine appears from the region in a range of guises – from structured and savoury to pretty and bright. Pinot noir is a grape famous for reflecting its place, and the many sites and soils of the Peninsula influence the styles you will find (read more about these here).

Mornington Peninsula wineries add their stamp to the region’s high-quality chardonnay fruit in a variety of ways, but there’s an elegance that ties them together. Whether you prefer lean and citrusy or rich and creamy styles, you’ll find a Peninsula chardonnay to suit your tastes.

The climate of the Mornington Peninsula is ideal for pinot gris/grigio. Local winemaking couple Kathleen Quealy and Kevin McCarthy clued onto this and are largely responsible for the spread of the grape in Australia, setting the bar for what the styles can be when from the right environment.

The thirst for spice-flecked shiraz from cooler regions has seen area’s such as the Mornington Peninsula take Australia’s favourite grape and make it their own. Top examples from the Peninsula show black and purple fruit, liquorice, peppery spice, and fine tannins.

These are the main players on the Mornington Peninsula, but there are more than 20 varieties in the ground. Keep your eyes peeled for sauvignon blanc (many in the barrel-fermented French style), gamay (Eldridge Estate is a top maker), and more.

Things to do on the Mornington Peninsula

There’s an overwhelming amount to see and do on the Mornington Peninsula, from hot-spring hopping to berry-picking and golfing on world-class greens.

Before you begin your Mornington Peninsula wine tour, choose from an array of excellent cafes for breakfast, coffee and takeaway treats (Merchant & Maker is one top option in McCrae). The winery restaurants of this region are also exceptional, so be sure to secure a seat for dinner or a long lunch. While you’re stocking up on wine at the cellar doors, seek out some regional produce as well, with delicious olive oils and cheeses among the offering. And if you’re keen to mix up the pinot noir and chardonnay tastings, pop into the Mornington Peninsula Brewery for a beer, or book into Bass & Flinders Distillery to make your own gin.

The various sculpture gardens and mazes around the Peninsula are a good way to break up all of the eating and drinking, as are the coastal walks with sweeping ocean views. If you’d prefer to intersperse the indulgence with some pampering, the Peninsula Hot Springs and Day Spa Centre is one of the region’s most popular attractions, featuring more than 50 bathing experiences across its indoor and outdoor pools.

Where to stay on the Mornington Peninsula 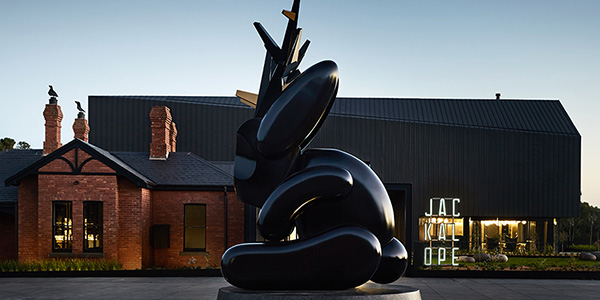 Given the amount of ground to cover, visiting for a weekend or more is recommended for a trip to the Peninsula. Two of the best places to stay are the pretty vineyard cottages at Polperro and the ultra-luxe suites at the Jackalope Hotel. No matter where you choose, though, the overwhelming number of attractions that will keep you out and about mean as long as you have a comfy bed to crash into, you’ll have a wonderful time.