There are more and more reports of wildfires around the globe. Here, we hear firsthand accounts of their destruction and learn the impact of fire on vines, wines, and the community behind them.

For farmers, natural disasters come at a cost that can be hard to understand unless you’ve experienced it firsthand. Imagine working hard for months only to be told that instead of being rewarded for your effort, you won’t be paid? For those who lose crops because of fire, frost, heavy rain or hail, that’s the situation. In the context of wine, all of the labour that goes into caring for vines over a growing season or longer can be wiped clean with one catastrophic event. Ahead, we hear from those who were touched by fire during the hot and dry 2019 wine vintage in Australia.

Even Australia’s coolest winemaking state faces the issues of heatwaves and bushfires over summer, and this year was one of the worst seasons on record. For wineries in southern Tasmania, the smoke clouding towns and vineyards was the pressing problem and one that had immediate and long-term effects. Dry lightning was said to be the cause of the fires. Home Hill was one of the producers affected by the issue, and although the bushfires didn’t burn its vineyards directly, the smoke that travelled 10 kilometres and laid over the grapes did. 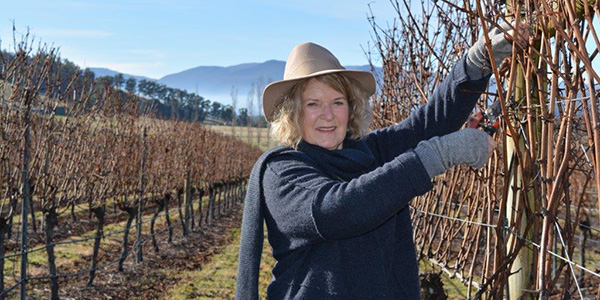 “We have a restaurant and cellar door in addition to the vineyard, and visitation to the area ceased for nearly two weeks, which was a huge loss to our business and, of course, the surrounding businesses,” says Rosemary Bennett of Home Hill (pictured above). “The Tasmania Fire Service was appealing to visitors to stay away from our area, and the consequences were no customers, no income and still needing to pay our staff during that time.”

“Our wines now have smoke taint as a result of the fires. It has affected our pinot noir grapes so badly that we will not have a 2019 Estate Pinot Noir or Kelly’s Reserve Pinot Noir, which are the core of our business,” she adds. “Because the smoke affects the skins, when the grapes are pressed, the taint goes into the juice. The nose and taste are like an ashtray. We think our chardonnay might be starting to show signs of it, too, but we’re hoping that’s not the case.”

To still use the fruit, Home Hill is trialling a white pinot noir, which will eliminate the smoke-tainted skins from the process and so those ashy characteristics. In the meantime, other vintages of their range are available, with the highly regarded 2018 Kelly’s Reserve Pinot Noir soon to be released.

This high-altitude, cooler climate wine region was another that was devastated by bushfires this year. Again, it started with a lightning strike that was able to wreak the havoc it did because of the dry conditions and wild country, with lots of kindling for sparks to ignite. Topper’s Mountain, which is on the edge of the Mount Topper State Forest, was right in the path of the fire. “It was pretty traumatic,” owner Mark Kirkby says. “You only want to go through that once in a lifetime.”

“When the fire arrived at the boundary of the forest and our vineyard, it was 30 metres high. It was roaring – we could hear it from about 3pm, and it got to us by about 9.30pm,” Mark says. (Below: looking through the vines to the forest fire.) 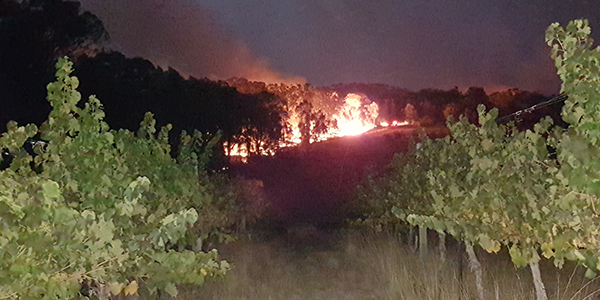 “The thing that got us was the embers. The fire didn’t encroach directly – it was that sparks flew into the vineyard and caught alight. The ones that started the fire landed about 50 metres into the vineyard, so there isn’t much we could have done. In a slightly less dry year than we’ve got now, it wouldn’t have been a problem for us. Normally, we get a fair bit of summer rain. If it had been even a little bit green, it would have slowed the progress of the fire down dramatically.”

The warming climate is one contributing factor. “For the last two years, we’ve had less than 50 per cent of our average rainfall. I’ve spoken to some older guys around here who say there’s never been a fire like that in this area in their lifetimes.”

For Topper’s Mountain, it’s a long road ahead. “The fire got us the night we were due to start picking, which means no vintage 2019. About 11 per cent of our vines are dead, and another seven per cent have a root system that’s alive but need a lot of work to recover. It’s probably a six-year job to get back to where we were. The other painful thing is the damaged vines are scattered throughout the vineyard. Every row has some dead vines and others shooting from the ground, which means whenever you go to work on it, you’ve got to traverse 30 kilometres of rows. We’ve only gathered the data and done the little bits so far. We haven’t even begun to fix the problem. Bruce and Jeni at Chalmers and Nick Dry at Yalumba can propagate the vines we need, and we hope to have them all replaced by spring. We’ve got 16 to 18 varieties in our vineyard, so it’s a huge job.” 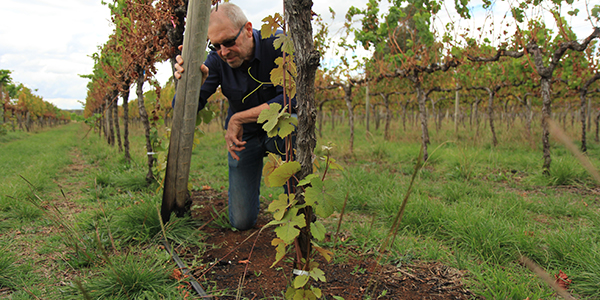 In spite of all that, Mark (pictured above) feels positive about the future. “Since the fire, people have continued to support us. It’s great the way communities pull together in these events.”

Bushfires aren’t always due to natural causes. Sometimes, it’s a case of environmental factors, such as hot and dry conditions, coupled with human activity. That’s what Jim Barry Wines experienced just before Easter when a farmer burning off stubble, and the unusually warm, dry and windy weather, caused a fire to break out. That fire burnt through rare vines in one of Jim Barry’s assyrtiko vineyards. (Below: Jim Barry’s charred vines.) 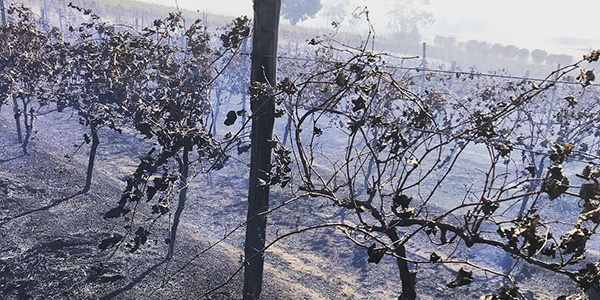 “Luckily, the Country Fire Service got the fire under control before it could burn the remainder of this vineyard and my parents’ house,” Sam Barry says. The plan is to replant this year, and the Barry family is looking at around seven years of work to get the vines back to where they were. Fortunately, though, they have several other sites planted to the variety – the first holdings of assyrtiko in Australia.

These are some of the regions and wineries affected by bushfires, but there are more in basically every state, from the Granite Belt in Queensland to Gippsland in Victoria.

What can you do?

The best way to help wineries affected by fires is to drink their wines! And if you’re travelling to these regions, pop into the cellar doors. Supporting these wineries is good for everyone – you’ll give back, and get some great wine in return.

With the recent wildfires in California, New Zealand and Greece, to name a few, this is a global issue. Fires are happening more often and they’re becoming even more intense. One way Australia is acting as a thought leader for the wine industry is through its research into smoke taint.

“It was following the 2003 fires in Canberra that the first instances of smoke taint were reported to us,” Con Simos of the Australian Wine Research Institute (AWRI) says. “Since then, we’ve found smoke taint is difficult to pinpoint in the early stages after a fire event, as that ashy character often develops in wine over time. It’s also hard to fix at a winemaking level.” The AWRI has focused its efforts on detecting smoke taint early to empower producers with that knowledge. “Grapegrowers and wine companies send fruit they suspect has smoke taint to the AWRI for analysis,” Con says. “Australia now has the most advanced methods for identifying smoke taint, and other countries look to us for insights on the issue.”