Whether you’re searching for a gift to impress or would like something a bit different for yourself, these five bottles fit the bill.

As someone constantly in the details of wine, when it comes time to drink a bottle, I want it to be fun. That means I’m usually on the hunt for wines to surprise. It’s particularly exciting when they’re not only ‘different’, but also exceptional quality – clean, bright, delicious styles that entice you back for another mouthful and glass (and, inevitably, to spend on more bottles). I would snap up the five wines here whenever I saw them, without question, and happily present them to loved ones. The varieties featured, while not uncommon in their places of origin, are less frequently found in Australia, and the bottles ahead represent some of the best examples around. 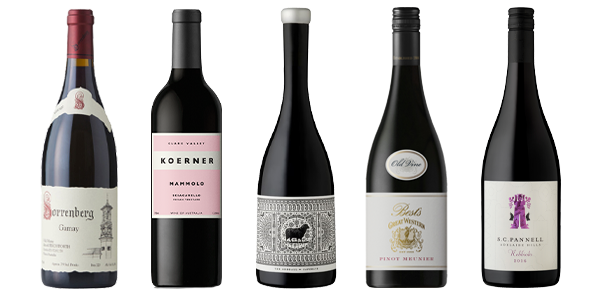 Gamay has been in Australia for more than 40 years, and it has slowly grown in prominence and plantings over this time. For a while, this red grape had a bad name thanks to an oversupply of cheap and cheerful Beaujolais, but today, it’s right on-trend. Barry and Jan Morey of Victoria’s biodynamic Beechworth winery Sorrenberg have long been among the leaders of Australian gamay, and their meticulously made style has a cult following. With a 10 per cent splash of pinot noir in the mix, its red and purple fruit, warm spice, earthy and savoury flavours bound by soft tannin and fresh acid explain why it’s so coveted. A beguiling style that’s suitable for cellaring.

Mammolo hails from Tuscany, where it’s typically blended with sangiovese, but the nearby island of Corsica is better known for its straight-up styles. In Corsica, the variety is called sciacarello (pronounced shack-a-rello), which means crunchy. True to its name, this is a textural, zippy and slightly herbaceous red wine. It’s rare on these shores and that’s a shame, as it’s a joy to drink and excellent with food – it’s particularly good with simple, red-sauce dishes featuring herbs and spices. The Koerner Mammolo Sciacarello, by Clare Valley brothers Damon and Jono Koerner, is a pure expression that’s light, lively and aromatic – close your eyes, and you could mistake this for a white.

The ancient Georgian grape saperavi produces wines with deep colour, bold tannins, dark berries, florals, spice and an attractive bite. It’s a unique drinking experience that Hugh Hamilton has shared with Australians for more than a decade. Hugh was introduced to this millenniums-old variety by flying winemaker Lado Uzunashvili; the two producers even made a saperavi together called The Quirky. The Oddball, however, is Hugh’s varietal wine from McLaren Vale vines he has carefully tended and expanded over the past 12 years. The result? A luscious style that will please lovers of South Australian reds, with complex savoury and spicy notes to balance the moreish fruit flavours.

While pinot meunier most often flies under the radar as a blending component in sparkling and Champagne, it can produce ethereal, spice-flecked varietal wines with mouthwatering red fruit flavours. Pinot meunier as a red table wine has a legacy in Australia more than most places, and central Victoria’s Best’s is at the heart of that story. This exceptional example is made using fruit from vines planted in 1868, and has the balance and structure to drink now or age. Floral aromas lead into juicy cherry fruit flavours with pops of sweet and savoury spice. The framework of fine tannins and bright acid make this a style to take seriously – a truly stunning wine from this year’s Best Value Winery, made using fruit from the oldest pinot meunier vines in the world.

The beauty of nebbiolo is in its contrasts, with its delicate colour and perfume met by powerful tannins and surprisingly high alcohol. This paradox is part of the appeal, and why so many winemakers and wine lovers are fascinated by the variety. Even in its home of Piedmont in Italy, it’s a relative rarity, which only adds to the mystique. Stephen Pannell of the eponymous S.C. Pannell in McLaren Vale sources his nebbiolo fruit from the cooler Adelaide Hills and produces a style that is among the best in the country. It has the trademark grippy tannins, zippy acid, and savouriness combined with tart cherry and cranberry characters, with a silky mouthfeel and lingering finish.

For more interesting reds, take a look at the best of the best by variety’s ‘other reds’ category, with its leading wine an intriguing Yarra Valley nebbiolo.

Casey Warrener is deputy editor of the Halliday magazine and digital editor of winecompanion.com.au