James Halliday on his incredible journey

Prompted by the unearthing of some old pinot noir in the cellar, James Halliday reflects on the events that led to his life in wine.

In the 1950s and much of the ’60s, the average teenagers in a male-dominated social society were beer drinkers. The year 1956 marked the arrival of the Olympic Games in Australia, and the launch of Orlando’s Barossa Pearl, its bottle nodding to the shape of a pineapple. In November 1959, leading Melbourne wine merchant OR Crittenden’s extensive wine list offered 1955 Blue Nun Liebfraumilch for 31/6d a bottle and 1954 Grange for 16/6d a bottle.

The year 1965 proved a watershed year. On New Year’s Day, Len Evans was appointed the inaugural National Promotions Executive by the Australian Wine Board, his role ill-defined, to say the least. He had become Australia’s first regular wine columnist in 1962 in the widely read business magazine The Bulletin, his column titled ‘Cellarmaster Says’. The first tiny crush of Lake’s Folly was made by Sydney hand surgeon Max Lake in the celebrated 1965 Hunter Valley vintage. This shook the bastions of the large wine companies that utterly dominated the production and sale of table and fortified wines in Australia (exports were negligible). Finally, in 1965, Lindeman’s expanded out of NSW to acquire Coonawarra’s Rouge Homme.

I was swept up in these changes, although in 1966, aged 28, I became a partner with Sydney law firm Clayton Utz. This allowed me to increase the rate of my purchase of Australian wines, and at the end of the ’60s, to join with Tony Albert and John Beeston in the search for vineyard land in the Hunter Valley. In 1970, we acquired the four-hectare nucleus of what was to become Brokenwood. This ran alongside me falling under the spell of Len Evans and the opening of his combined restaurant and fine wine store in Bulletin Place. There was no social media, no sommeliers and only a few wine writers in Sydney and Melbourne.

Up until this time, my Jekyll and Hyde lives in law and wine had co-existed by making use of every hour of every day in the week. But the fast lane of these lives became more challenging as I began writing about wine on a meaningful scale, and I became active in purchasing the great wines of France through Christie’s Auctions in London. There the road bifurcated once again: my original fascination with the greatest wines of Bordeaux was supplanted by those of Burgundy (and to a lesser degree of the Rhone Valley).

The one dead end was pinot noir. We planted it at Brokenwood and made some in 1974/5, but it left me with the same profound sense of dissatisfaction that all other Australian pinots had engendered. Then, one Monday as we gathered at Bulletin Place for the wine options game played over lunch, John Beeston produced a bottle each of Mount Mary and Yeringberg pinot noir. In a split second, I knew the Yarra Valley was the Xanadu of Australian pinot, and that somehow, someday, I would grow and make pinot noir there.

In a split second, I knew the Yarra Valley was the Xanadu of Australian pinot noir.

My first move was to fly to Melbourne and visit the wineries of the Yarra Valley (shrouded by fog all through my first day of exploration). I had two purposes: first to provide full information for the Wines and Wineries of Victoria, one of a quartet of books covering the four wine-producing states by The University of Queensland Press. Second, I was to gain as much knowledge as possible about the topography, soils and climate of the Yarra Valley and its (then) 11 wineries. The book covered all regions of Victoria, made possible by my great friend (and chauffeur) Gary Steel, then an Ansett pilot yet to start Domaine Wine Shippers, but that’s another story. 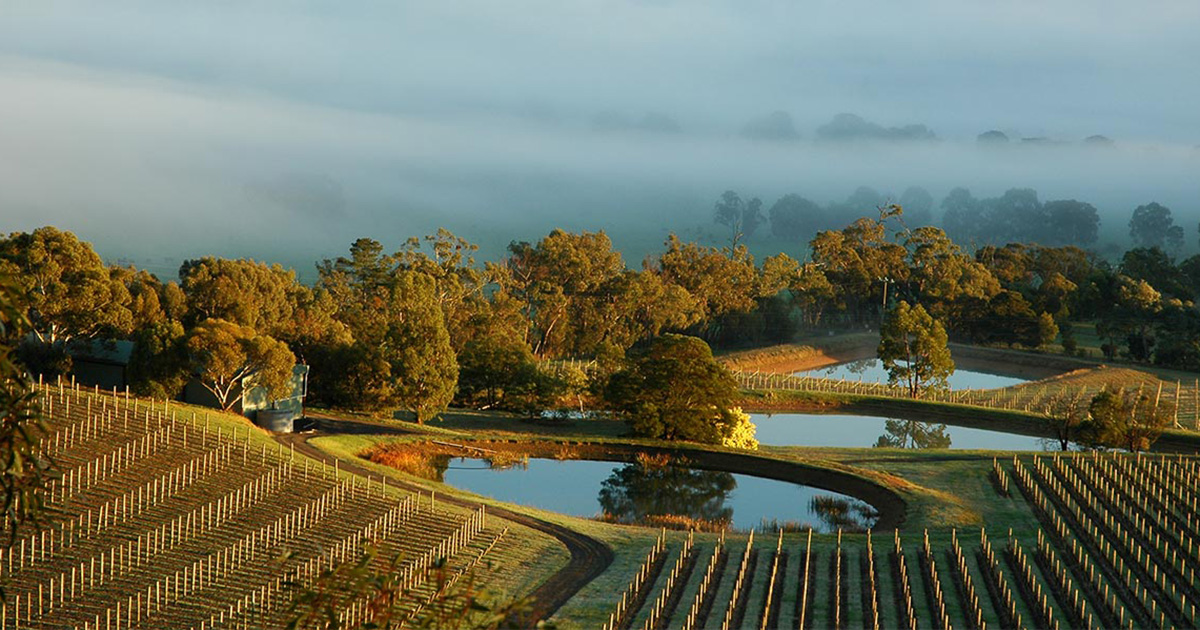 The view over the Coldstream Hills vineyard.

Out of the blue, the long-desired move to Melbourne of my law firm Clayton Utz took shape in 1983, and I was the partner who made the move. Fortune smiled again when, in the winter of 1985, the house that is still my home, came onto the market. For the next three years, I commuted – via train leaving at 6.21am from Lilydale – to my law practice in the CBD. In 1985, I made a small amount of Coldstream Hills wine that soon vanished; 1986 being the first vintage of consequence because in 1985, I purchased grapes for the vintage, chiefly from Yarra Ridge, where I also made the wine. Owner Louis Bialkower was my Melbourne-resident law partner, and I had been an observer when the vineyard was planted in 1983.

• In the 1950s and much of the ’60s, the average male teenager was a beer drinker.
• The year 1956 marked the arrival of the Olympic Games in Australia, and the launch of Orlando’s Barossa Pearl, its bottle nodding to the shape of a pineapple.
• In 1962, Len Evans became Australia’s first regular wine columnist, and in 1965, he was appointed the inaugural National Promotions Executive by the Australian Wine Board.
• Also in 1965, the first tiny crush of Lake’s Folly was made by Sydney hand surgeon Max Lake, which shook the larger companies that dominated the production and sale of wines in Australia at that time.
• In 1966, aged 28, James Halliday became a partner with Sydney law firm Clayton Utz, enabling him to explore more Australian wines.
• In 1970, James teams up with Tony Albert and John Beeston to acquire the land that would eventually become Brokenwood. James also begins writing widely about wine and purchasing the great wines of France through Christie’s, starting his fascination with Burgundy and pinot noir.
• Pinot noir was planted at Brokenwood in the mid-’70s, but the result didn’t satisfy. Soon after, having been introduced to Mount Mary and Yeringberg, James realised the Yarra Valley was where he needed to be.
• In 1983, James moved to Melbourne for work with Clayton Utz, and in 1985, the house in Coldstream Hills that is still his home came on the market (for three years, he commuted by train from Lilydale to his Melbourne CBD law firm). He made a small amount of wine in this year, marking the start of Coldstream Hills.
• In 1986, James purchased grapes from Yarra Ridge, where he also made the wine (owner Louis Bialkower was James’s Melbourne-resident law partner).
• In 1987, James found some mature pinot noir fruit to purchase from Chateau Yarrinya and made a hand-shake deal with owner Graeme Miller. When De Bortoli bought the site, he thought that deal was lost, but Leanne De Bortoli and husband Steve Webber honoured the agreement.
• The 1987, 1988, 1991 and 1992 pinot noirs James made began scooping up accolades at wine shows, positioning Coldstream Hills as one of Australia’s top pinot producers.
• In 2020, James discovers some pinot noir from these years in his cellar – it’s still bright, the bouquet and palate with a combination of fruit freshness and the multi-spice and forest floor complexity of age.


From the outset, I disclosed the source of the grapes on the front and back labels. The 1986 Coldstream Hills Yarra Ridge Chardonnay was 100 per cent sourced from that vineyard; the 1986 Three Vineyards Pinot Noir was 85 per cent Yarra Ridge, the remainder from Shantell and Calulu Park Vineyards. These two-headed the entries in the first wine show that Coldstream Hills entered, and I still remember sitting on the train wondering whether we had won any gold medals. In fact, the Three Vineyards Pinot Noir won the trophy for Best Southern Victorian Red Wine, and the Yarra Ridge Chardonnay won trophies for Best Southern Victorian White Wine and the trophy for Best Yarra Valley Wine (white or red).

In 1987, I heard that Graeme Miller of Chateau Yarrinya was looking to sell his pinot noir from vines that were then 10 years old. I leapt at the chance to use grapes with some maturity, and a hand-shake deal was done. Some months later, Chateau Yarrinya was purchased by De Bortoli, and I sadly wished ‘my’ pinot farewell. However, Leanne De Bortoli and husband Steve Webber met me and said they would honour the agreement if I still wanted the grapes – and obviously I did. Their integrity has shone through every move they have since made in taking De Bortoli – as they renamed Chateau Yarrinya – to a position of unchallenged pre-eminence in the Yarra Valley.

The 1987 Miller Vineyard Pinot Noir placed equal fourth in the 1988 Gault et Millau Wine Olympiades – the highest-rated wine of any origin outside of Burgundy. It also won numerous gold medals and awards, and it set Coldstream Hills among the top echelon of pinot producers in Australia.

The 1988 Rising and Shantel Pinot Noir was equally important, lifting the profile even further, and the 1991 Pinot Noir won the 1992 George Mackey Award for Best Wine Exported from Australia during 1992; the 1992 Reserve Pinot Noir another iconic wine of its time.

My bottles of these early wines inexorably dwindled over the years to only a couple of each – or so I had thought until my 7000-bottle wine cellar was turned upside down ahead of a series of auctions held by Langton’s in July. To my infinite surprise, a dozen bottles of Miller Vineyard Pinot Noir came to light in a badly-lit corner of the cellar. My surprise turned to unalloyed joy when I opened the first bottle, which, like its peers, had a very high fill (thanks to expensive 54mm chateau-length corks). The colour was amazing for a 43-year-old pinot; still bright, the bouquet and palate with a combination of fruit freshness and the multi-spice and forest floor complexity of age.

Did I consign any bottles of these early pinots to auction? No way. But if anyone is tempered to sell some, I’m a buyer.

This article is from issue #54 of Halliday magazine.