The low and no-alcohol boom

The cohort choosing drinks with alcohol of 0.5 per cent or less is growing fast. Cathy Gowdie takes a look at what’s driving the trend.

Deep into Melbourne’s long sixth lockdown, a friend opened his inner suburban front door to accept delivery of a case of wine. “Hey,” said the delivery guy. “You’ve had a haircut!” Classic pandemic moment, or an invitation to join the club embracing more mindful drinking?
When wine o’clock rolls around, an increasing number of us are reaching for a glass of something that looks like rosé – or beer, or an Aperol spritz – but contains only trace amounts of alcohol.

The cohort choosing drinks with alcohol of 0.5 per cent or less is growing fast. The usual suspects – expectant mothers and middle-aged wine aficionados whose blood pressure readings aren’t quite what the doctor ordered – are well represented, but they’re only part of it. Moderation is increasingly in vogue among drinkers of all stripes, with social media and the wellness movement playing a significant role.

“In the past two years, we’ve seen almost 100 per cent growth in sales of non-alcoholic drinks,” says Bree Coleman of Endeavour Group, parent company of Dan Murphy’s and BWS stores. It is one of the group’s fastest-growing categories. “With more innovation coming out of this space, we think this is just the beginning.”

IWSR forecasts growth of 15 per cent annually over the next five years, far faster than the one per cent predicted for total wine volume.

Smaller chains and independent stores report the same phenomenon; the range of people “drinking less but better” is widening. While retailers say the trend is most visible in cities’ inner suburbs, particularly among image-conscious younger drinkers, many more people are exploring the “sober curious” path, at least some of the time.

Members of this new conscious consumption corps are rarely habitual abstainers. Some mainly seek out no- and low-alcohol alternatives for specific occasions, like being a designated driver or embarking on a “dry” month, yet many are cutting back longer-term for health and lifestyle reasons. They’re used to enjoying full-strength drinks and want low-alcohol equivalents that taste equally grown-up, complex and delicious. Increasingly, they are getting them.

“Dramatic increases in quality and diversity have been marked in recent years,” says Mike Bennie, co-owner of Sydney’s P&V Wine + Liquor Merchants. “Where previously, very average, non-beer-tasting, non-alcoholic beers from mass-market producers were more or less the only offering, now a breadth of products of distinct quality, interest and great taste are available, with boutique producers leading the way.”

Demand for no- and low-alcohol wine is surging. International analysis firm IWSR forecasts growth of 15 per cent annually over the next five years, far faster than the one per cent predicted for total wine volume. Head to your local big-box liquor retailer and you’ll find offerings from an array of familiar brands – think Edenvale (a trailblazer in the new-generation no-alcohol category), Jacob’s Creek, Brown Brothers, McGuigan and more. Wolf Blass is among the latest to tap the trend with its October launch of a ‘Zero’ branded sparkling, sauvignon blanc and shiraz.

Newcastle-based Fourth Wave Wine, meanwhile, recently built on the success of its sharply packaged, resveratrol-boosted Plus & Minus label (“plus grape skin extract, minus alcohol”) with a new zero-alcohol range, Sobriety Society.

Historically, non-alcoholic wines were sugar bombs, in keeping with what producers believed non-drinkers favoured. Many weren’t actually wine: they were soft drinks in fancy dress, made from grape juice or concentrate. You’ll still find a handful these, mostly in the non-alcoholic sparkling category, but most of today’s no-alcohol wines are made in wineries and have been through full vinification, including fermentation; alcohol is removed afterwards.

Fourth Wave relies on a combination of extraction methods, says managing director Ross Marshall, one being an ultra-membrane filter for part of the process to remove alcohol from a finished wine. “This gentler method on some of the more premium parcels helps retain more flavour and body.” 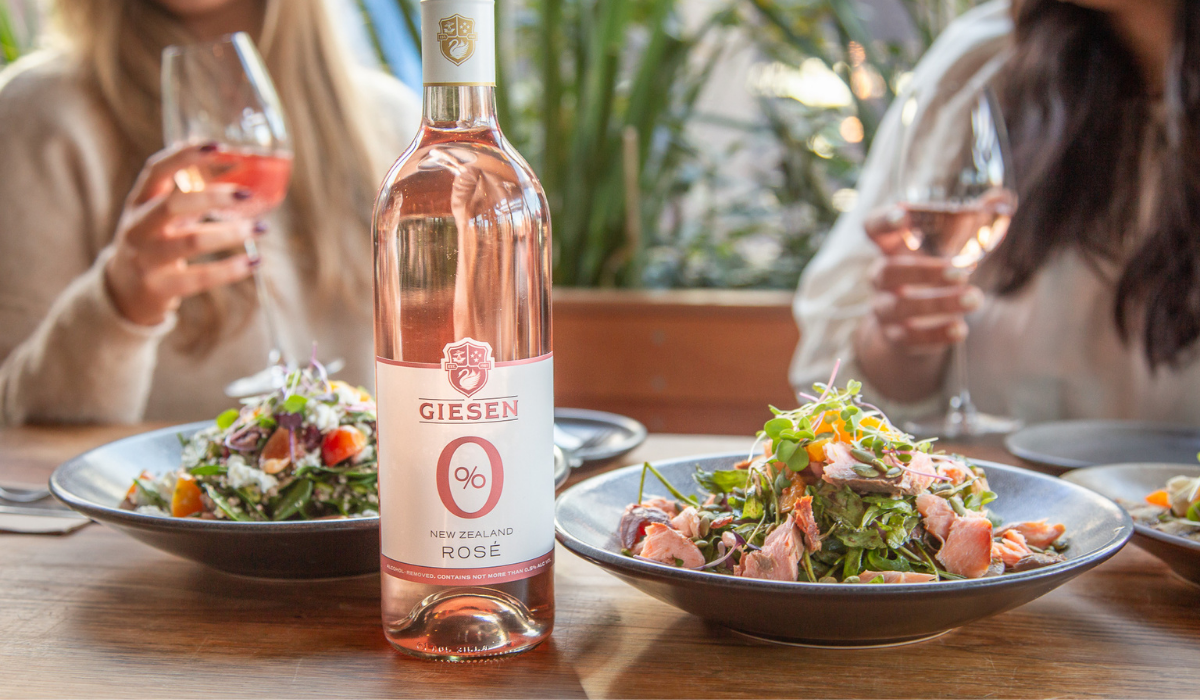 New Zealand’s Giesen is among those using spinning cone extraction. Giesen recently added a zero-alcohol rosé and a pinot gris to its 0% label, which launched in 2020 with a sauvignon blanc. The company acknowledges that when alcohol is extracted from wine, it loses more than the buzz – it loses palate weight, too. Traditionally, sugar has played an important role in compensating.

With consumers avoiding sugar as well as alcohol, winemakers try to reduce sugar volumes and perceptions of sweetness, often relying on acidity and tannins to improve balance and texture. Giesen uses yeast proteins to boost body and mouthfeel across the 0% range, which it says contains between 70 and 80 per cent fewer calories than comparable 12.5 per cent wines.

It’s no coincidence that many of the most successful no- and low-alcohol wines are made from aromatic varieties, or are bottled as sparklings, where bubbles deliver the expected palate sensation.

“It seems that aromatic white varieties suit the alcohol-free category best, perhaps because they retain character despite the alcohol-removal process,” says Leanne Altmann, beverage director at the Trader House restaurant group. “The best I've tasted was 'Eins Zwei Zero' riesling from Rheingau producer Leitz, where the use of residual sugar to bolster body seems intuitive, speaking to traditional feinherb and kabinett styles.”

Trader House wine teams have offered alcohol-free menu pairings at Melbourne’s Cutler & Co since 2013, but finding suitable wines remains a challenge. “While I’m yet to find an alcohol-free wine that has the level of expression I’d expect to see from any other wine on the list, I’m confident we will start to see higher-quality interpretations as the category matures in the market,” Leanne says.

This is an extract of an article that first appeared in issue 62 of Halliday Magazine. Become a member to receive six editions a year, plus digital access, and also unlock more than 150,000 tasting notes and other exclusive wine content.

More on low and no-alcohol