A guide to the Australian wine vintage 2019

All year long, growers, viticulturists and winemakers work towards vintage. It's when the grapes are ripe and harvested from their vines. Vintage is an exciting yet nerve-wracking time, involving long days and intense labour. The conditions must be just right, and there are many processes to follow, from picking to pressing, fermentation and beyond. We run through some of the key elements that are critical at this time of year.

Vintage refers to the process of harvesting grapes from their vines once they’re perfectly ripe. When winemakers consider grape ripeness, sugar, acid, and tannin levels are measured to determine when they are ready to be picked. Vintage occurs each year, and in Australia it runs from about two to four months, depending on the region and grape varieties involved. Optimal temperatures leading up to, and during, vintage are pivotal to how the year’s harvest transpires. Threats of heat, rain, hail and frost can harm the grapes, create disease and, at worst, spoil the fruit. Once vintage is complete, winemakers them employ a range of different methods and techniques to turn the fruit into wine. 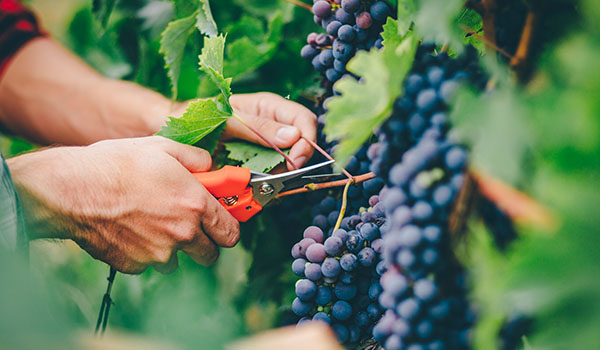 What Makes a Wine Vintage?

A vintage wine consists of grapes that were all — or for the most part — grown and harvested in a single year. A wine’s vintage, found on its label, communicates this year. For instance, grapes that are picked in the 2019 vintage will therefore feature 2019 on the resulting wine's label. Although most grapes are harvested in a single period, small portions can include previous years — the exact amount varying between countries. In Australia, a vintage wine requires 85% same-year grapes. 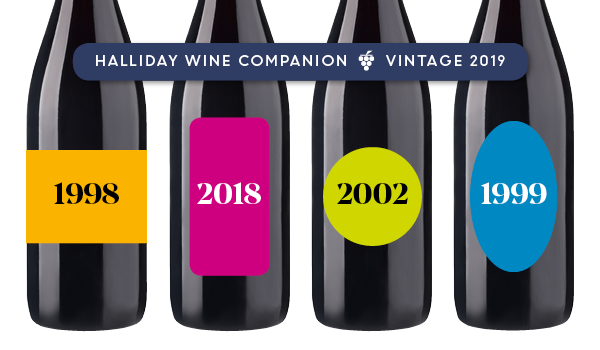 Vintage wines communicate the intricacies of an entire growing season through taste, which can often be completely different from the previous year's wines. If winemakers wish to produce consistent wines in regards to their taste and quality, blending multiple years together can sometimes achieve a desired style. These wines are labelled non-vintage. Non-vintage wines are usually a blend of two or more wines, and a common example celebrated worldwide is Champagne that is labelled Non Vintage, or NV. Another example would be fortified wines, which are often non-vintage.

The History of Australian Wine Vintage

Australia has long been a producer of world-class wines. The first vine cuttings to arrive in Australia were brought over in 1788 by Governor Phillip of the First Fleet from South Africa. Despite what many had hoped, these vines did not produce the first Australian wine vintage. Some time later, in the early 1800s, John MacArthur planted pinot gris, frontignac, gouais, verdelho and cabernet sauvignon vines on his property in Camden Park near Sydney. This marked the first commercial vineyard and winery in Australia, producing examples of Australian wine that were imported around the world. The 1830s marked an important time in Australian wine history when the Hunter Valley wine region was established, thanks to James Busby. After returning from France and Spain with an honourable collection of European varieties, he planted the vines, which included the famed Australian shiraz. 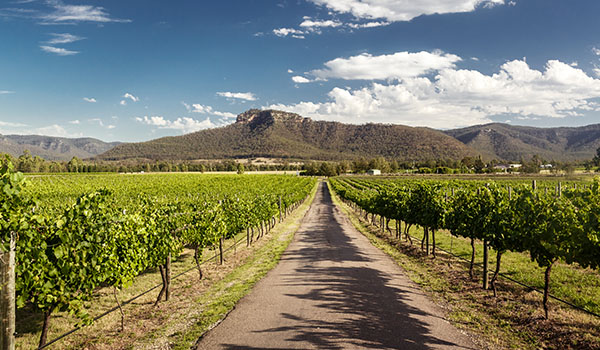 Wine is produced right around Australia within several climates. Australian wine therefore shows varied complexities, parading different terroirs. James Halliday says that "each terroir, small or large, is unique and hence not duplicated anywhere else in the world."* The hot climate of the Northern Territory proves difficult for viticulture, although there are some small vineyards operating there. Below lists the major wine states of Australia and their specific climates.

Arguably the heart of Australian wine, South Australia is home to many famed wine regions, including the Barossa Valley, Clare Valley, McLaren Vale, Eden Valley, Adelaide Hills and Coonawarra. Overall, the area enjoys warm dry summers, with winters that are cool, mild and wet, although every region has its own specific conditions and varying climates – the Riverland, for example, can be very warm, while the Adelaide Hills has a cooler climate. Rainfall is minimal overall.

New Sales Wales is the birthplace of Australian wine, with vineyards spanning cool-climate regions, including Orange, the Canberra District and Hilltops, and also warmer regions such as the famed Hunter Valley, which also gets higher rainfalls. Areas such as Mudgee and Cowra are known for both being warm and dry.

Victoria has the most wineries than any other wine-producing state in Australia. It's known for its exceptional cool climate regions, including the Yarra Valley, Mornington Peninsula, Macedon Ranges, and the King Valley and Alpine Valley. Victoria also has a number of highly regarded warmer regions such as Rutherglen, to name just one. The Murray Darling is landmarked in Victoria for its warm, dry climate that produces flavour-packed grapes.

Western Australia generally has a temperate climate, thanks to the cool breeze of the Indian Ocean. The Great Southern is the largest wine region of Australia (39,007 square kilometres) and includes five subregions: Porongurup, Mount Barker, Albany, Denmark, and Frankland River. These areas differ with various climates and are overall the coolest in the state. Great Southern also experiences less rainfall than the maritime climate of Margaret River, similar to Bordeaux in France during a dry vintage. A warmer wine area in the state is the Swan District — the warmest in Australia.

Tasmania is the coolest wine region in the country and Australia’s southern-most state. Many parts are cold, and perfect for the production of dry whites and sparkling wines. There are warmer regions within Tasmania too, such as the Coal River Valley and the Freycinet Peninsula. Pinot noir from Tasmania is fast becoming known as some of Australia's finest.

Although a predominately hot place, Queensland is home to both cool and warm wine regions. The cool climate Granite Belt even receives snowfall at times, whereas the South Burnett is warmer, and also where the majority of Queensland’s wine grapes is grown. Both regions represent different climates and produce contrasting wines of equal quality.

There are many different ways to make wine, some more common than others. The red winemaking process is similar to the white, with rosé and sparkling production using techniques of their own. 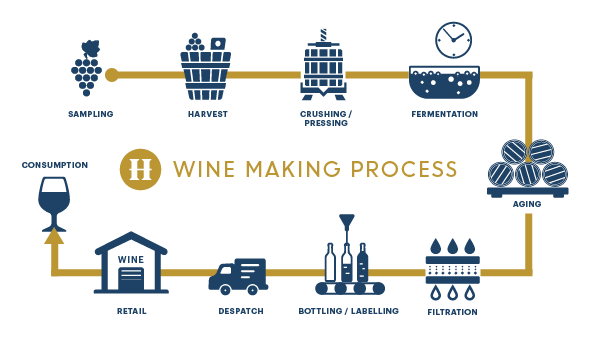 Once the red wine grapes are at the desired level of ripeness, they are harvested and, commonly, destemmed, although many producers also work with whole bunches. The grapes are then crushed and placed in an environment where yeast is able to grow. The skins are kept on the grapes, producing a deep colour. Fermentation commences once the yeast has consumed the sugars, turning to alcohol (red wines are fermented at higher temperatures than white wines). The grapes are then pressed to extract the juices. Ageing can run between four months to four years before the wine is bottled. Fining can occur during ageing to clarify the wine. At this stage, additives may be used. The wine can also then be filtered, and finally, ready for bottling. Although many bottles go through the fining and filtration stages, many do not, which can result in wines that are cloudy in appearance.

The white winemaking process differs slightly to the red. The main difference is that white wine production commonly uses grapes without their skins during fermentation. Another is that white wine is fermented at a cooler temperature, capturing the fruit's flavour profiles. After picking and destemming, the next step is to remove the skins from the grapes by crushing them. The grapes are pressed and the juice is collected before fermentation occurs. Depending on the wine style being made, it will then be aged, which can add depth and complexity. Most white wines are commonly filtered before they are bottled to clear any cloudy qualities and stabilise the wine.

There are many ways to produce rosé wine, the most common being the maceration method. This method refers to red wine grapes being grown and harvested for the specific purpose of making rosé wine. They’re also picked at a lower brix compared to other grapes, which is purposeful to keep acidity levels up and sugar levels down. The grapes are left to sit for a considerately shorter amount of time than usual, with the end result being a soft pink coloured wine (rather than a deeper red). Another method is the saignée method (translating to 'bleeding' in French), which is a by-product of red wine. In this method, a small amount of juice is bled off after a few hours of fermenting. The remaining juice will increase in concentration levels and create deep red wine, while the separated juice can be enjoyed as rosé. A less popular method is blending, which is when a small amount of red wine is added to white wine during production.

Sparkling wine production can seem technical. There are six methods most often used that each result in a different style of sparkling wine. You’ll most often hear of the traditional method (used for Champagne), and the tank method (used for prosecco). Other methods include the transfer, ancestral, continuous and carbonation methods. These involve many intricate steps, and can be discovered on our sparkling page.

Although the above outline describes the most common winemaking processes, there are alternative methods that winemakers follow that best suit their vineyard and style of wines. Many alternative winemaking paths are taken during the production of minimal intervention wines, for instance.

The timeline below shows the expected months that each Australian state will begin vintage. As climate can change unexpectedly each year, this timeline is also subject to change. Winemakers are constantly aware of the weather and continue to reshape their processes to produce the finest wine possible. James Halliday says that "for Australia (exceptions such as Coonawarra to one side) climate is the most significant factor (outside vignerons' control) impinging on grape quality and wine style."