To keep pace with a changing climate, forward-thinking producers are shifting the how, where and what of Aussie wine. Just don’t call them alternative varieties.

In June last year, the general assembly of Bordeaux winemakers unanimously voted to allow the use of seven new grape varieties in Bordeaux and Bordeaux Superieur appellation wines to combat the effects of climate change.

The grapes, which include Portuguese favourites touriga nacional and albarino, and southwest France’s petit manseng, were chosen because they possess a resistance to drought, disease and extreme heat that the region’s strictly controlled varieties do not – cabernet sauvignon, merlot and shiraz. It’s all very experimental, but if it works out, this new regulation could be a lifeline to a region trying to balance thousands of years of tradition with a 21st-century climate. The winemaking world will be watching closely.

While Australia is not bound by the strict laws and regulations of the Old World, it was founded with Old World grapes, such as those of Bordeaux, and is also in a race to adapt as temperatures rise and water becomes increasingly scarce – although here the onus is very much on the individual.

The founding philosophy of winemaker Sue Bell’s label Bellwether is its ability to withstand the impacts of climate change. This extends to the location of her Coonawarra winery, chosen because the Limestone Coast is buffered from rising temperatures by cold currents coming off the Antarctic, and adequate rainfall in winter. 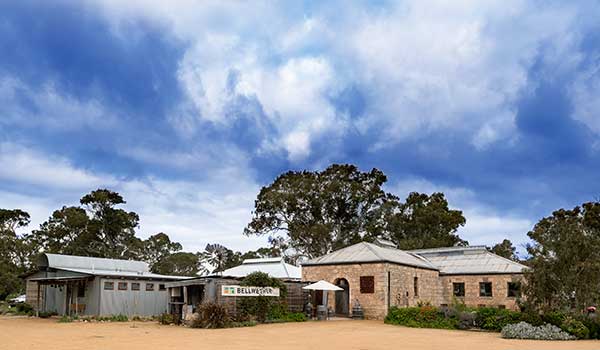 “We’re getting eight or nine good years to a decade and I definitely think it’s from climate change,” Sue says. “If you go back 30 years, Coonawarra would have a couple of seasons each decade that were real stars. Now we’re picking a month earlier than we did 20 years ago and we don’t seem to have trouble ripening tannins.”

But it’s not all roses. Sue says frost is a major challenge – countered by expensive fans and micro jets across the region – plus yields are down, and while they’re getting enough rain for now, it’s definitely below average.

Like many Australian winemakers, Sue is hedging her bets. She doesn’t grow her own fruit, instead choosing to tailor the grape to the region: a rise in temperatures in Coonawarra is beneficial for ripening cabernet sauvignon, but it won’t do any favours for riesling. She sources that from the cool Tamar Valley in Tasmania.

Sue is also reluctant to rely on the so-called noble grapes, sourcing vermentino from Victoria’s Heathcote and montepulciano from South Australia’s Riverland. She jokes that we should call these “appropriate” varieties, instead of “alternative”. “The people that colonised Australia did not understand the climate and planted varieties close to their heart in sometimes inappropriate places. Now we know that’s not necessarily viable,” she says.

Gary Mills of Jamsheed made a name for himself with cool climate, single vineyard, natural syrah when most Australian winemakers were still focused on big, jammy fruit bombs. He dry-farms sauvignon blanc, syrah and merlot in the upper Yarra; grapes he wouldn’t have been able to ripen here just 20 years ago. He says an increase in growing temperature has opened up new areas of the region and led to a rise in fruit quality, but it’s also condensing the growing seasons, which comes with its own set of problems.

“In 2016, chardonnay, cabernet and riesling were all ready to go in one weekend. You couldn’t find enough pickers [Gary was sleeping in his truck so he could spend more hours harvesting fruit] and we were fermenting in green bins because we didn’t have enough space for the juice.”

It’s also making the business of winemaking prohibitively expensive, or at least more so than it already is: the high value of Yarra Valley land influenced Gary’s decision to set up his winery and cellar door in Melbourne’s Preston because it’s significantly cheaper than 11,000 square metres in a wine region, and he’s looking to alternative varietals and other regions to future-proof his business.

Beyond the Yarra Valley, Gary is sourcing roussanne from Victoria’s Beechworth and “rescuing” fruit that isn’t up to scratch via a quirky pet-nat he calls Candyflip. But the real star is his Heathcote-grown sagrantino – a crunchy, lighter-style red that tastes nothing like the astringent version you’d find in Italy’s Umbria. “It’s about personal style. I’m not interested in massive, tannic wines and people don’t really want to buy them anymore,” he says.

“Climate change is the number one consideration on everyone’s minds,” Gary says, adding that fashion dictates the wine styles he makes, citing the demand for drink-now styles is equally important.

There’s absolutely no doubt that the sheer number of new varietals in the hands of Aussie winemakers is thanks to Victoria’s Chalmers family, who grows 27 different, largely Italian, grapes in their Heathcote vineyard and more than 50 in their Mildura nursery. 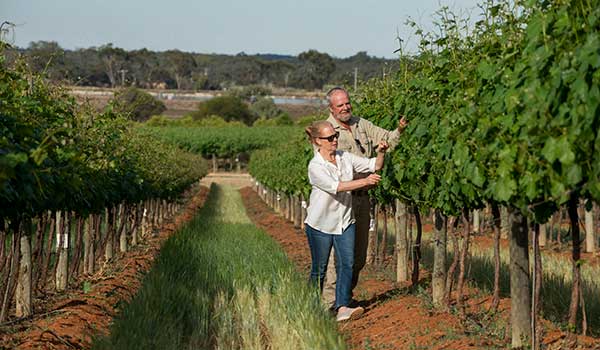 “They’re always looking for the next big thing,” says Kim Chalmers of her parents Bruce and Jenni Chalmers (pictured above), who co-founded the Australian Alternative Varieties Wine Show in 1999. They are also the reason that most Aussie wine lovers know what vermentino and fiano are.

Kim says a lot of their decisions about which cuttings to bring into Australia come down to what people want to drink. “In the ’90s, it was all about high-alcohol, rock-star reds like sangiovese, nero d’Avola and nebbiolo, but with today’s drinking trends it’s about textural whites and lighter reds.”

Supply and demand aside, Kim says the most important factor is an ability to deal with a warming climate. That means a focus on thick-skinned grapes that are drought tolerant, resistant to sunburn and disease, and with plenty of natural acidity. “It’s very much about what’s working here, not what is popular in Italy,” she says.

One of Australia’s best new alternative varietals comes by way of happy accident at Jim Barry Wines, the 2020 Halliday Winery of the Year, with proprietor Peter Barry the first to release a local take on assyrtiko – Santorini’s beloved crisp, dry white that’s famously trained into a basket shape to protect it from the island’s fierce winds.

It’s the winemaking equivalent of a holiday romance: the Barrys first tasted the grape on holiday in Santorini in 2006, and today they have five hectares planted across four Clare Valley sites. “It was a big gamble. Back then, Greek wines were not on anyone’s radar,” says general manager Tom Barry. “There was no market research, it was purely Mum and Dad’s passion for the grape. We didn’t think about it too much, we just went and did it!”

Well, they’re certainly thinking about it now. The variety, which Barry says is best suited to the slate soils of their south-facing Lodge Hill vineyard, needs less water and ripens almost three weeks later than its riesling neighbour, which helps with that same vintage compression Gary Mills is dealing with in the Yarra Valley.

Tom says the overarching plan is to stick with what the Clare Valley does best, which is riesling, cabernet sauvignon and shiraz, while adding a few more strings to their bow. The success of their assyrtiko has shown that Greek grapes are quite at home in the Clare Valley and they’re thinking about putting in aglianico and xinomavro, too.

The summer of 2019 was one of the hottest and driest on record. While the world’s leaders argue about why – and what to do about it – winemakers are finding their own solutions, including investing in climate-appropriate grapes that will hopefully become household names. Getting drinkers to choose these wines over their usual chardonnay and shiraz is another story, but Kim Chalmers says maybe it’s time to stop calling them “alternative varietals” and simply call them what they are: Australian wines.

For a list of related wines to try, see the full article in the February/March issue of Halliday magazine, out now.