An easy drive north of Melbourne is Heathcote, a wine region with rich red soils and lively, flavoursome red wines. Following a relatively straight shot up the Northern Highway, you’ll arrive at the historic High Street, peaceful creek, and craggy landscape of this diverse district, well known for its distinctive expressions of shiraz. Add to that expansive mountain ranges, reservoirs and reserves, and Heathcote makes a wonderful weekend escape from the busy of the city.

James Halliday paints an idyllic picture when he says: “Viewed from the air, the red soil country is a spectacular scene: square or oblong patterns of vivid red alternating with verdant green rows of vines. On the ground, the slopes of the Mount Camel Range are equally impressive, and it is easy to see why land values have soared.” 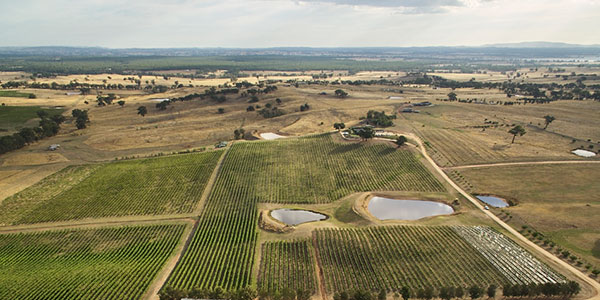 Heathcote is a sprawling region with idiosyncratic pockets. The north is known for its luscious reds, with their brilliant hue and concentrated flavour, while the south, sharing its border with the cool and rocky Macedon Ranges, can produce refined, refreshing whites.

Heathcote sits roughly in the middle of a triangle that has Melbourne and the major regional hubs of Bendigo and Shepparton at each of its points. As well as wine, its historic township has art galleries, produce shops, great pubs, cafes and bakeries, plus beautiful bushland and remnants of the region’s gold-mining past in its surrounds.

The history of wine in Heathcote

Its soils might be millions of years old, but Heathcote is a relatively young wine region. Like many other areas of Victoria, it has a gold-studded past and for the most part, wine took a backseat until much later. There were some vineyards in the region in the 19th century, planted by pioneering German settler Henning Rathjen, but most of that early wine-growing land was decimated by the vine disease phylloxera. It wasn’t until the next century that the grape-growing industry really gathered steam – over the last 60 years, the story of wine in Heathcote has been furiously written.

A handful of hardworking visionaries were behind the revival of the industry. Paul Osicka, a Czech winemaker, was one of the first to lay down roots in this region at a time when it was relatively unknown. Together with a group of trailblazers including Albino Zuber and Bruno Pangrazio, the foundations for the Heathcote of today were laid. (Bruno’s vines were eventually acquired by Ron and Elva Laughton of Jasper Hill – two people who have been integral to the success of the region and an inspiration for many others to set-up here.)

Heathcote’s wine industry underwent a period of rapid growth in the ’70s, ’80s and ’90s, but it was only in the early 2000s that it got its own Geographical Indication, following a lengthy debate about where the boundary lines should be drawn. With Nagambie to the east, the Macedon Ranges to the south and Bendigo to the west, there are several ways it could have gone. But in the end, the region as we know it was established.

There are now more than 70 wineries across Heathcote. Thanks to its special soils and sought-after red wines, several big players have invested in vineyards here – the region has even attracted acclaimed international makers such as Michel Chapoutier from France. Today, the producers that call Heathcote home include family-run businesses, biodynamic wineries, Italian grape specialists, and many more.

The climate and winemaking conditions of Heathcote

The sheer size of this wine region means the environment varies greatly from place to place. There are several subregions – stretching from Tooborac to Colbinabbin – and their assorted altitudes, sites, and microclimates make for a fascinating tapestry of wine styles. One distinguishing and oft-discussed feature of Heathcote is its ancient Cambrian soils, resulting in intensely coloured and flavoured wines. Similar to the terra rossa of Coonawarra, this calcium-rich material swerves through the region in a rough strip, hugging the Mount Ida and Mount Camel Ranges, and is responsible for complex, cellarworthy reds.

Heathcote experiences warm days and cool nights across the harvest season. The north is hotter and the south cooler, and the variation throughout allows diverse varieties to thrive.

Broadly speaking, Heathcote is known for its opulent red wines. Shiraz is the standout star, and Spanish and Italian varieties, such as grenache, tempranillo and sangiovese, are on the rise. Great whites are also found from certain areas, including fine chardonnay and Rhone whites like marsanne, roussanne and viognier.

Heathcote is shiraz country, and the varying expressions it produces are part of its charm. Savoury, spicy, pretty, elegant, and ample styles are all found here. James describes the shiraz of the region as mouth-filling, densely coloured and richly flavoured, with texture ‘akin to a great tapestry’ and tannins that are supple and ripe.


Fresh, flavourful, stone-fruited chardonnay is common in Heathcote – despite the warmer climate, there is an overall sophistication to the wines, and plenty are suitable for the cellar.


Before the shiraz boom in Heathcote, cabernet sauvignon was the mainstay, and it still has a stronghold in terms of plantings. The rich fruit of the region can balance cabernet’s inherent structure, resulting in highly drinkable styles. Wines from the north tend to be full-bodied and with the characteristic blackcurrant and cassis, while the south more frequently shows mint and spice in elegant, medium-bodied wines.


Merlot is sometimes made into single-varietal wines in Heathcote, but mostly it is found in blends, with its silky tannins and sweet fruit a popular complement to a variety of reds.


Later-ripening varieties are excelling in Australia’s warm and dry wine regions, so it’s little surprise to see grenache on the rise here. Examples from Heathcote can be complex, floral, spicy and with an attractive savouriness.


The climate of Heathcote is well suited to tempranillo, providing the characteristic red (particularly cherry) fruit flavours, warm spices and structural tannins. This variety and similar Spanish and Italian reds show promise for the future.

Things to do in heathcote

As well as indulging in the wines of the region and picking up a stash for the cellar, you can fuel up for vineyard touring at welcoming cafes and bakeries, stop for lunch at excellent winery restaurants, and work it all off by biking or hiking along beautiful bushland trails. Among the not-to-be-missed natural highlights are the striking gorges of the Pink Cliffs Reserve, and the unique ecosystem of the Heathcote-Graytown National Park.