A visit to the Macedon Ranges promises graceful wine, award-winning dining, and peaceful scenery. It’s the ideal spot for a cosy country escape, full of natural beauty, architectural charm, pristine produce, and top riesling, chardonnay, sparkling, shiraz and pinot noir. Learn about the cool-climate wine of this unique part of Victoria in this guide, as well as everything else there is to eat, see, drink and do in the region. 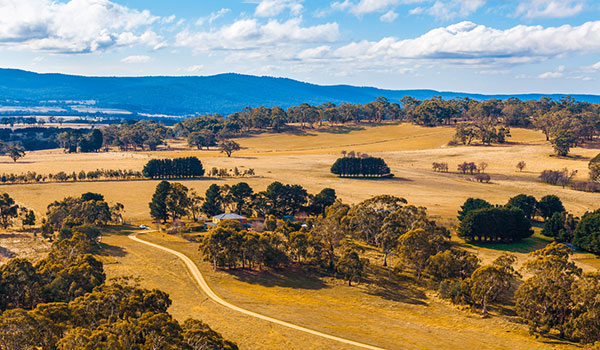 “The region is often overlooked by wine tourists, who thus miss the small, historic towns and sweeping vistas. For those who do go, there are none of the cellar door crowds, nor traffic, of the better-known regions,” James Halliday says. It is, indeed, one of Victoria’s best-kept secrets. Uncover its spoils ahead.

WELCOME TO THE MACEDON RANGES

You’ll arrive at the Macedon Ranges in under an hour’s drive from Melbourne, and be greeted by streets lined with heritage buildings and big leafy trees. The Macedon Ranges is a favourite spot for Melburnians who crave a slower pace and more space, and the community that lives and works there has contributed wine bars, coffee shops, cafes and restaurants as good as any you’d find in the city. Within a vibrant dining culture such as this, there’s always a thirst for good wine, and the Macedon Ranges delivers.

Across the length and breadth of this region, you’ll find plenty of small producers offering distinctive styles. The Macedon Ranges is a sprawling place, and its shires include Gisborne, Lancefield, Trentham, Romsey, Kyneton, Baynton and others. The different locations, altitudes and environments of these areas influence the resulting wines.

The history of wine in the macedon ranges

According to James, wineries first sprung up in the Macedon Ranges around 1860 – and then disappeared by 1916. The renaissance didn’t come until more than a century later when artist and restaurateur Tom Lazar set-up the Virgin Hills vineyard in 1968 (characters such as Tom are typical of the region, which attracts many creators).

Granite Hills followed in 1970, and Hanging Rock in 1982. The former is one of the region’s great success stories, famed for its ageworthy riesling and pioneering cool-climate shiraz; the latter has scaled up by looking out, sourcing fruit from around Victoria, but also producing estate wines that include some of the region’s best sparkling.

Today, there are around 64 wineries and 27 cellar doors, which is still relatively small. That’s because this is tough viticultural land, and to thrive here, producers need to navigate winds, frosts and low-yields, to name a few. It’s not for the faint of heart.

Those who have persevered, however, have managed to produce some of the country’s most sought-after wines (thanks, in part, to the limited nature of these releases). The stellar pinot noir and chardonnay of Bindi Wine Growers have made it an icon of the region. Curly Flat likewise excels with these varieties and is one of the Macedon Ranges’s most recognisable names, its wine famously praised by top UK wine critic Jancis Robinson, among others.

Illustrating the popularity of the region for tree-changers, Lyons Will Estate was started by ex-advertising professional Oliver Rapson and his physiotherapist partner Renata Morella, who left Melbourne to chase their dream of tending a patch of land by hand. Shaun Crinion, the winemaker of former Halliday Best New Winery Dappled Wines, consults to Oliver and Renata on their excellent small-batch wines.

Through careful site selection, smart fruit sourcing and sheer determination, this mix of historic, iconic and passionate producers mean the Macedon Ranges of today has a reputation for high-quality, limited-release styles. Only the grittiest producers have survived here, and the following for their wines is more than justified.

The high elevation of the Macedon Ranges makes it the coldest wine region on Australia’s mainland, with some extreme conditions that include snow in winter and frost in spring. It’s precipitous, windswept and wild, and it produces super-low yields of characterful styles. The way fruit grows here means much of it needs to be cared for and picked by hand, making it a labour-intensive place to produce grapes. The long, cool growing season is favourable for drinkers, though, as it can result in complex, beautifully fragrant wines.

The Macedon Ranges is a diverse wine region, with a lot of variation in its altitude and terrain. The vineyards are between 300 and 700 metres above sea level, and where they sit on that spectrum has a marked effect on the wines. As a general rule, sites in the south-west are colder, producing floral, aromatic styles, while the north-west is slightly warmer, which can mean more muscular, powerful wines. There are also many microclimates throughout the region, and the soils range from rich and red to granitic and sandy.

A part of what James Halliday calls ‘the Melbourne dress circle’ of pinot regions, which also includes Geelong, Gippsland, the Mornington Peninsula and Yarra Valley, this lighter red wine is a regional star. As tends to be the case with great pinot regions, on the white side, chardonnay is a highlight, and both varieties go into splendid sparkling wines. As well as those, seek out the region’s mouth-watering riesling and spicy shiraz.

Thanks to the cool climate of the Macedon Ranges, pinot noir retains its refreshing natural acidity and bright fruit flavours, providing fresh, vibrant and elegant styles of the wine. Across the region, you’ll find varying degrees of weight, fragrance, power and prettiness.

Fine-boned chardonnay, with flavours that range from citrus to stone fruit and mineral notes, is found here, although the winemaking that can be applied to this variety means many variations on a theme. No matter your preference, there will be a classy style that’s for you.

The Macedon Ranges produces some of Victoria’s best rieslings, showcasing minerality, sharp acidity, citrus and blossomy notes. The balance, length and complexity of riesling wines from this region make them an ideal style for ageing.

This region was one of the first in Australia to champion the medium-bodied, spicy style of shiraz that’s fashionable today – the granitic soils of the area are perfect for it. Dark fruit and liquorice are typical, as is the trademark spice.

It is James Halliday’s opinion that virtually every producer who endeavours to make sparkling wine here succeeds, and with access to first-rate pinot noir and chardonnay (aka the key varieties of Champagne), it’s easy to understand why.

Things to do in the macedon ranges

Food lovers rejoice – the Macedon Ranges is a top destination for indulging. Its hubs are full of acclaimed restaurants that critics rave about and that people make the pilgrimage to try. Du Fermier, Source Dining and the Midnight Starling wine bar are a few favourites. There are also more casual spots for good coffee and locally grown produce – try Trentham General and the Social Foundry. And if you need a break from wine, visit the excellent Holgate Brewhouse in Woodend.

To work up an appetite for all that goodness, get out onto the walking trails around the ranges. Hike to the summit of Mount Macedon for sweeping views, or go for a picnic at Hanging Rock. The region is a popular destination for admiring the fireworks of leaves in autumn, but there are picturesque landscapes to marvel at here throughout the year.

In November, don’t miss the weekend-long Budburst Wine and Food Festival’s enticing line-up of events. Over two days, 30 wineries, including some that aren’t typically open for tasting, swing open their doors in celebration of the warmer weather and flowering vines.

Where to stay in the macedon ranges

Kyneton and Trentham are two of the best places to base yourself for a mix of wine, dining and activity in the Macedon Ranges. If you have certain wineries you want to visit, however, map out your itinerary first, or else you might find yourself driving long distances between cellar doors. Work out where the majority are and plan your accommodation from there.