Few things are more exciting in the wine world than watching a region come into its own. South Australia’s Riverland is doing just that.

Sustainability is transforming South Australia’s Riverland. A sweeping embrace of alternative grape varieties has brought kudos to a raft of growers, which is changing the way their vineyards are managed and resources are used in the region. Ultimately, this results in a league of exciting wines that are changing the Riverland’s reputation.

The efficiency of drought-tolerant grape varieties, popularised by the likes of Ashley and Holly Ratcliff through their network of 10 Ricca Terra vineyards at Barmera, means profitability can come from smaller vineyards. These grapes are commanding higher prices than Riverland’s historically infamous bulk fruit. Due to this economic shift, Ashley believes the region will be a more concise grape-growing area in another 20 years, enjoying greater efficiency, productivity and quality.

“If we take the macro approach to observe Riverland vineyard management, I can see we’ll be growing grapes on less area to make a decent living – and therefore we’ll be using less water, and less inputs of every type to make high-quality wines,” Ashley says. “Climate-appropriate grape cultivation equals truly sustainable wine regions.” 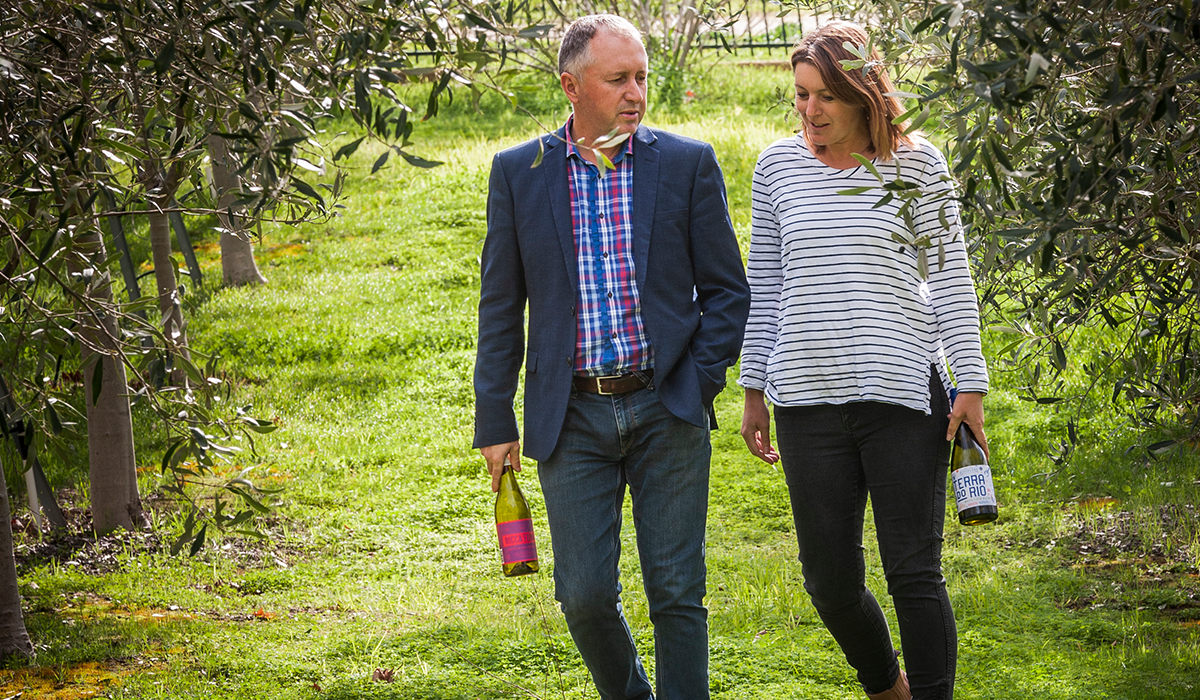 Ricca Terra stands as a shining example. It is 16 years since the Ratcliffs started planting vines, and they now nurture more than 30 grape varieties on 70 hectares, including nero d’Avola, fiano, aglianico, greco, nero di Troia, montepulciano, souzão, negroamaro and arinto. Then there are more recent plantings of Portuguese varieties such as touriga nacional, tinta cão, tinta barroca, tinta amarela and tinta caiada. Some varieties produce up to 100 tonnes while others are planted to a single row to gain a better understanding of how the variety performs, with success stories resulting in more intensive planting.

This has provided a vinous playground for many of Australia’s most adventurous winemakers, with long-time buyers of Ricca Terra fruit including producers such as Bellwether, Unico Zelo, Shaw + Smith’s The Other Wine Co, Brash Higgins, Alpha Box & Dice and Ansel Ashby’s Gatch Wine.

There are now more than 120 individual wines produced from Ricca Terra grapes, prompting the first Festa Del Vino wine show last October that brought together about 80 wines for a comparative tasting. It included the diverse sweep of the Ratcliffs’ own Ricca Terra and Terra do Rio labels, through to micro-producer pet nats, and experiments such as arinto having additional lees stirring to enhance mid-palate texture.

What the Festa Del Vino judges and winemakers saw on the tasting bench was the tangible evidence of a new Riverland – especially as many local plantings of alternative varieties now have up to a decade of vine age. “With some varieties, such as nero d’Avola, we are seeing vines in perfect balance, producing flavours of great consistency,” Ashley says.

This was supported during Festa Del Vino seminars led by leading winemakers Louisa Rose of Yalumba (knowledgeable of Yalumba’s Oxford Landing vineyards near Waikerie) and Hentley Farm’s Andrew Quin (who uses Ricca Terra’s grenache for his own brand, Quin Wines). They pointed to continuing advances in Riverland viticulture, sustainability practices and wine quality.

“It’s a pinch-yourself moment to see that a dream has come so far so quickly,” Ashley says. “It’s the diversity that’s so exciting – so much variation in how people are making these wines.” 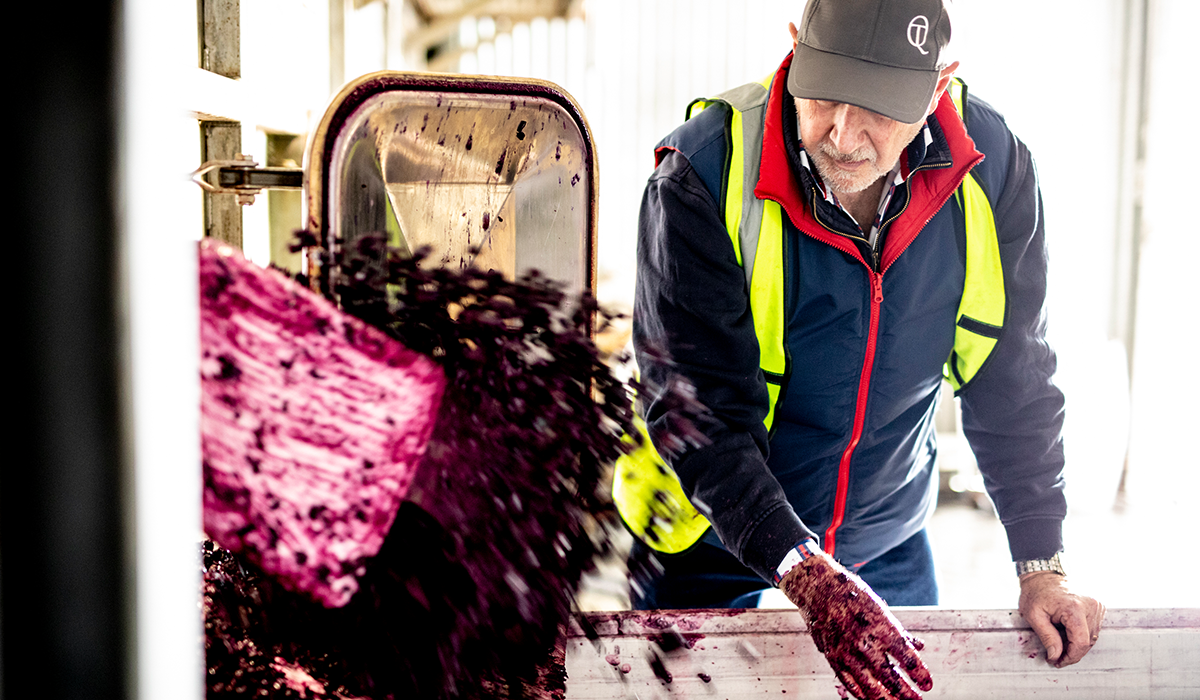 A shift in quality of Ricca Terra fruit

A notable shift in the quality of fruit has changed perceptions of what can be achieved in marketing Riverland-branded wines. It’s why Kevin O’Brien of Kangarilla Road chooses to buy Riverland fruit ahead of the same alternative varieties from his McLaren Vale neighbours. He finds greater finesse and acid structure in fiano from Ricca Terra vineyards, where he also sources montepulciano and nero d’Avola. “Who would have thought we’d be having this conversation about Riverland fruit a decade ago? But the fruit quality speaks for itself,” Kevin says. “It has its own distinctive character.”

Kevin’s son Charlie O’Brien is also buying Ricca Terra fruit for his critically acclaimed Silent Noise wines, and finds no resistance to Riverland branding on the bottle from an under-30 generation of wine buyers. “They just taste good booze, and they support it,” says Kevin. “There’s no prejudice, just preference for what they like.”

The Riverland’s status continues to rise among the adventurous tribe of young winemakers. It’s all due to affordability – not just buying distinctive grapes at an affordable price, but also being able to sell modestly priced wines that make their fledgling boutique brands attractive to wine lovers in a crowded marketplace.

This is foremost in the thinking of Marcus Radny. He makes decisions for his Mornington Peninsula-based label Gonzo Vino that link affordability to sustainability, such as packaging wines in bag-in-a-box casks rather than bottles. “It’s difficult for some people to move beyond existing prejudices,” Marcus says. “So, like the Riverland, I have some history to overcome with my decision to release good-quality wine in casks, but once people taste what’s inside, they’re sold.” 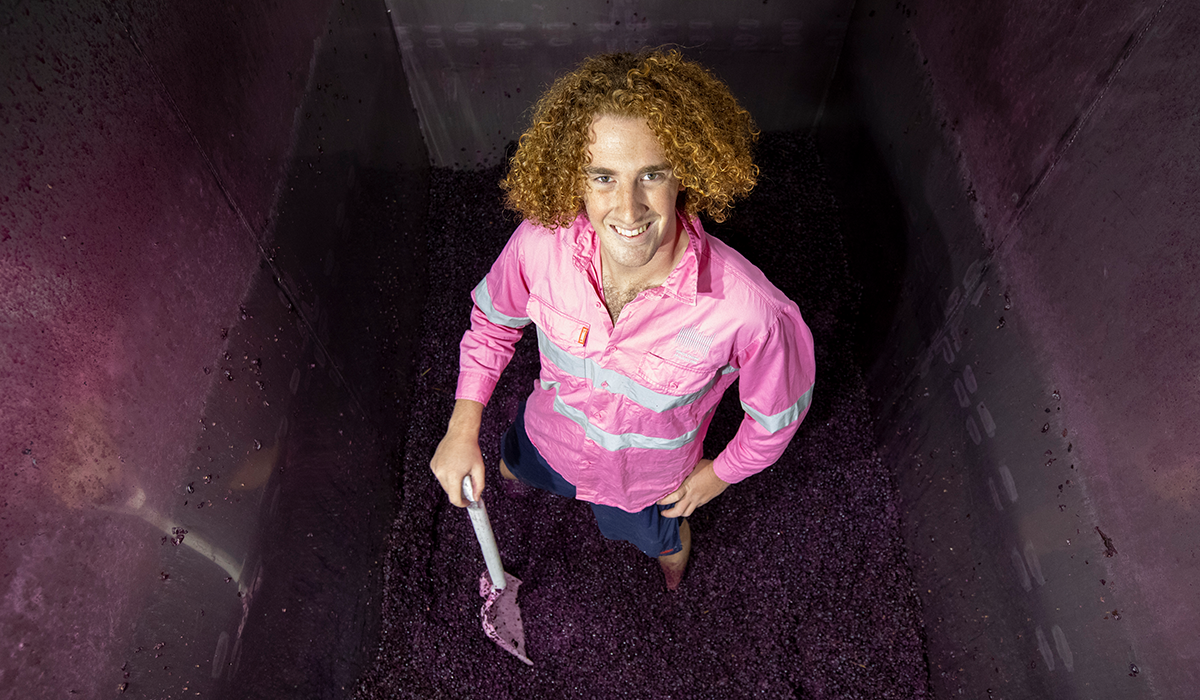 Vermentino, one of the region's shining stars


Gonzo Vino three-litre casks of Get A Grip Vermentino, sourced from Ricca Terra, show a bright and fleshy take on the variety, with ripe fruit having about six hours of skin contact that adds a pleasing textural roll to the rich lemon and honeysuckle notes. “I think vermentino will keep growing in popularity and take over a slice of the market from pinot gris in this country,” Marcus suggests.

He’s not the only winemaker getting excited about vermentino’s possibilities. Small Victories' vermentino, made from Ricca Terra fruit by Jules Ashmead (whose family runs Elderton Wines in the Barossa), walks the fine line between generosity and firm structure. “We love this take on vermentino. The fruit is juicy and present, and there’s a lovely crunchy acidity, which gives the wine some definition on the palate,” Jules says.

“Vermentino got out of the blocks fast as one of the popular alternative varieties, but some big wine companies only treated it as a neutral wine, which didn’t see it flourish as a style. Now, we’re seeing a lot of different interpretations and these wines are generating a lot of interest.”

The sense of fun surrounding these new-gen Riverland wines is pervasive. Ashley promotes the region as a fun place to be, flying his major city-based wine buyers to Barmera for on-site wine tastings over a barbecue before water-skiing on the Murray. “I want the same vibe when I finally build a cellar door – a big funky shed that’s relaxed and all about having a good time.”

Such sunny enthusiasm is winning many friends. Marcus’s perception of the Riverland, based on history and hearsay, dissolved once he visited the vineyards. “It’s so different to what I thought the Riverland would be like – so many small blocks, so much variety,” he says with a note of surprise. “Developing relationships with good people in the Riverland is a key to all this. More people in Australian wine need to visit this region, and then we’ll really see a change to its reputation.”