by James Halliday
Presented by Vintage Cellars
To qualify for this award, each winery has to have received a five-star rating for the first time and a history of at least four lesser ratings. Yarran is Dark Horse of the Year and accordingly heads the list; the remainder are in alphabetical order.

Sam Brewer was raised by grapegrowing parents John and Lorraine, and when he completed his wine degree at Charles Sturt University, the family celebrated by taking a tonne of shiraz and fermenting it in a stainless-steel milk vat. Since then, production has risen and grape sources have broadened as Sam has put beyond doubt his winemaking skills. It is doubly appropriate that one of the wines securing the Dark Horse accolade should be an estate-grown Riverina shiraz selling for $15. If that is your price limit, Yarran gives you the best-quality wines, both white and red. Yarran’s track record suggests this award is no flash in the pan. Find out more. 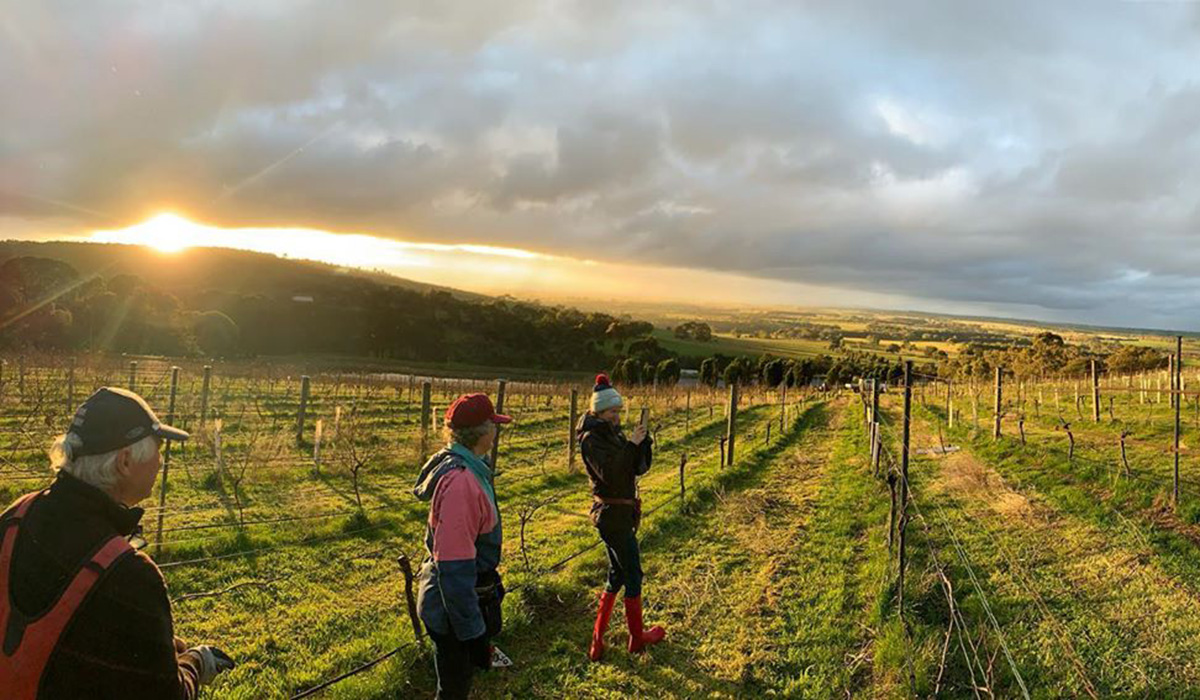 Sunset at Barwon Ridge
Barwon Ridge kept to itself after its establishment in 1999, making a single appearance in the 2010 Halliday Wine Companion, coming back in ’17. Winemaking at Leura Park is part of the reason for the rating rise since ’18, now five stars. The wines are all vegan. Find out more.
Challon and Patricia Murdock decided to use the DIY approach when they planted 1.8ha of chardonnay in 1996 – and saw 50 per cent of the vines die. In 2000, they planted 1.1ha of pinot noir, which had to be replanted in ’01. Stoically, they planted shiraz, nebbiolo, sauvignon blanc, viognier, tempranillo and pinot gris, and hit pay dirt in 2018. Scott Ireland and Sam Vogel of Provenance make the wines, hence the quality. Find out more.
Heathcote’s 50-million-year-old vivid red Cambrian soils (derived from weathered greenstone) have a proven track record with shiraz, and this is the focus of the substantial estate plantings dating back to 1999 at Ellis Wines. Bryan and Joy Ellis were happy to sell their crop to high-profile wineries such as Taltarni, Domaine Chandon and Heathcote Winery, but were doubly rewarded when they decided to keep part of the production for their own wine. In 2019, their 2016 Premium Shiraz won a gold medal at the Royal Melbourne Wine Awards, and the 2018 Viognier won a gold medal and trophy at the Heathcote Wine Show ’19. Find out more. 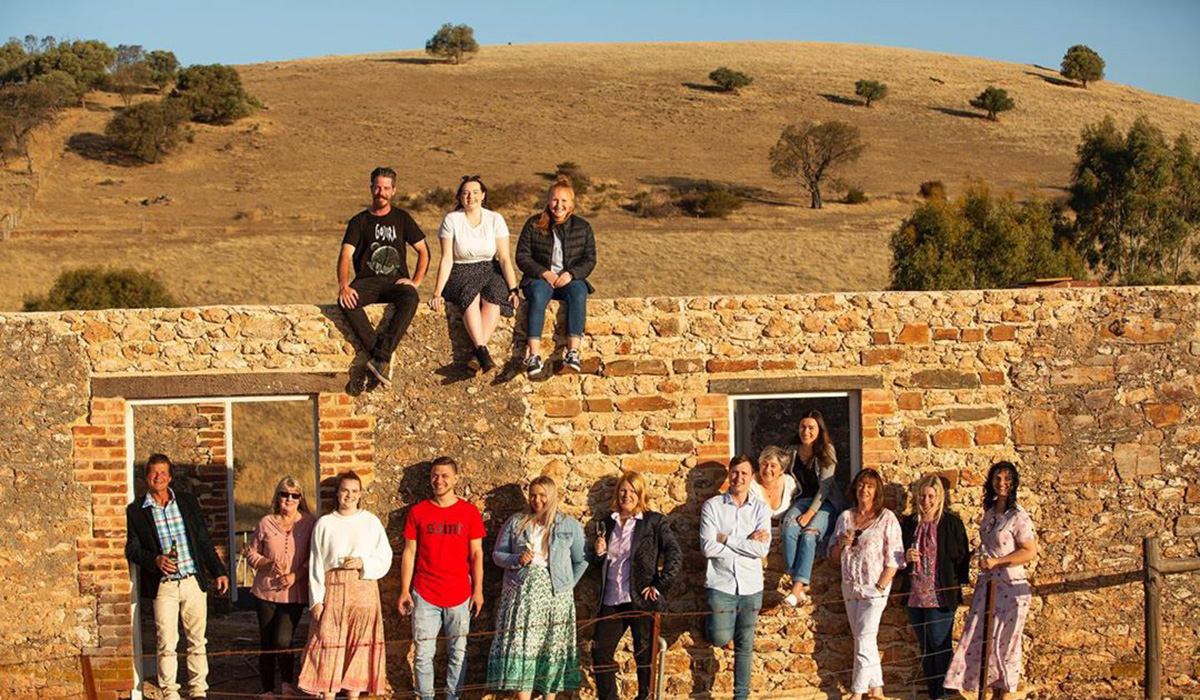 The team at Pindarie
Owners Tony Brooks and Wendy Allan met at Roseworthy College in 1985, Tony a sixth-generation farmer studying agriculture, New Zealand-born Wendy studying viticulture. Tony went overseas for years, managing sheep feedlots in Saudi Arabia, Turkey and Jordan. Wendy spent 12 years with Penfolds, rising to become a senior viticulturist, working vintages in California, Israel, Italy, Germany, France, Portugal, Spain and Chile along the way. Since 2014, Pindarie has received 4.5 stars five times and so was overdue for five stars, which it earned in fine style this year with two wines at 97 points, a third with 95 points. Find out more.
An unusual journey, disappearing from the Halliday Wine Companion between 2009 and 2020. It burst back onto the scene in ’17 when purchased by the three members of the Lembo family,  who are highly successful wedding/event operators in Perth. They lured the highly talented Digby Leddin from Lamont’s Winery – after two decades of service there, he was seeking a new challenge, and rose to it with showers of awards in ’19. Find out more.
A lunch on the property with Alec Epis, AFL legend, and Stuart Anderson, wine industry veteran and founder of Balgownie Estate, encouraged Peter Sidwell, Melbourne businessman and racehorse owner, to plant 12ha of vines as a minor diversification. There are two labels, Fairbank (the 19th-century name of the property) and the small-volume Estate range. The arrival of Melanie Chester, a former Len Evans Tutorial scholar, has seen good wines become great. Find out more. 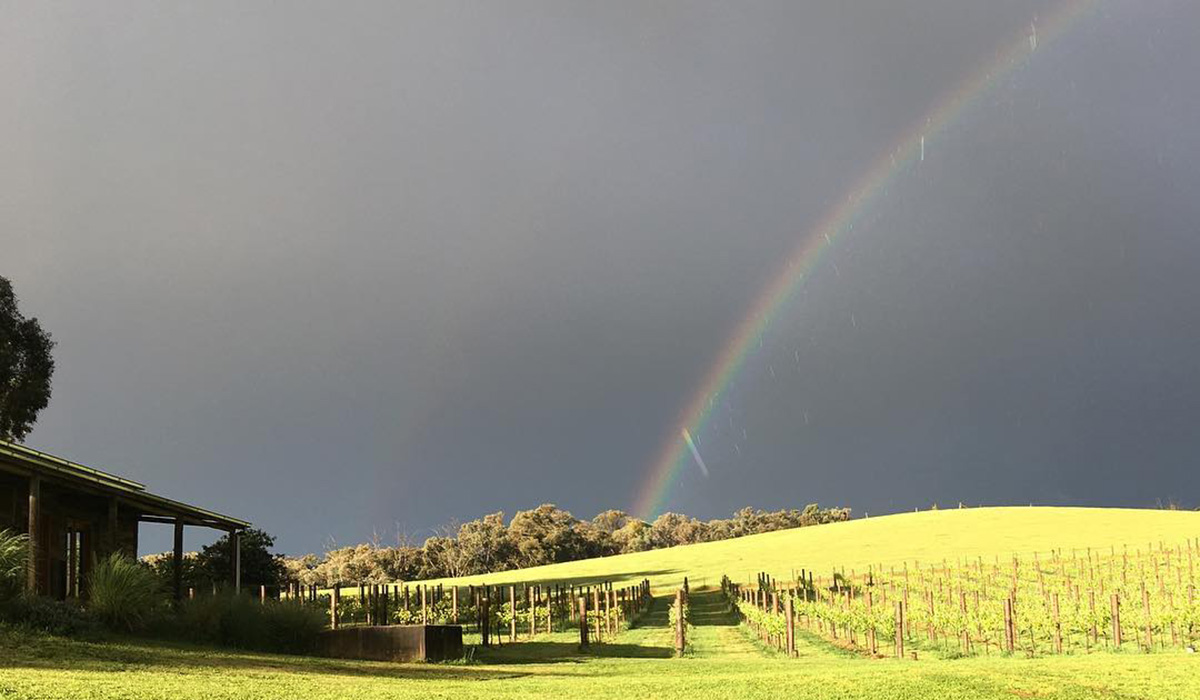 A rainbow over the Traviarti vineyard
After 15 years in the fine wine business in Melbourne, both as buyers and thereafter in sales and marketing, Simon Grant and Helen Murray began the search for a suitable place to grow and make nebbiolo, chardonnay and tempranillo. They found a place in 2011, sufficient for a 0.43ha vineyard and a tiny on-site winery. With a second vineyard recently planted to nebbiolo and barbera, production will upscale from the present 650 dozen. Find out more.
This is the darkest of all the dark horses, having been content with a terse two-line winery summary in the Halliday Wine Companion that in no way did justice to owner/winemaker Anita Goode or her wines. Wangolina did not submit wines for the 2014, ’15 and ’18 editions, and came within a whisker of doing so this year. Which would have been a pity, because things are happening at Wangolina, Anita making admirable wines, including gruner veltliner and excellent Mount Benson semillon and syrah. Find out more.
Since 1991, Sam Plunkett and Bron Dunwoode have moved backwards and forwards from small to large operations in the Strathbogie Ranges. They bounced in and out of the Halliday Wine Companion, but since the 2018 edition have earned four or 4.5 stars, breaking through to five this year after catching the eye of tasting team member Jeni Port. They also attracted the attention of Naked Wines, and hey presto, production leapt to 70,000 dozen, the grapes largely supplied by contract growers. Find out more.

This edited extract is from the 2021 Halliday Wine Companion guide, published by Hardie Grant and available at all good bookstores.