Tasmania continues to shine as one of Australia’s finest wine regions. James Halliday takes a look at its rapid recent development and ongoing rise in quality across the board.

As Australian state borders fully open to domestic travel, but international remains off limits, Tasmania will become a priority destination. Over the past 50 years, I have visited Tasmania wearing my lawyer’s hat, as a fly-fisher for trout, as a judge at the annual Tasmanian Wines Show and as a journalist. I’ve been to every part of the state, including the wild western side, with its horizontal forest and extremely ancient geology, the central highland lakes and streams, and just about everywhere grapes are grown.

Over the past 50 years, I have visited Tasmania wearing my lawyer’s hat, as a fly-fisher for trout, as a judge at the annual Tasmanian Wines Show and as a journalist.

The decision taken by Tasmania’s winemakers not to create regions under the Geographic Indications regulations is, in my view, entirely correct. In my travels across Europe, the US and Asia, I repeatedly experienced the fascination that Tasmania holds for those who have never visited it. From Tasmanian tigers (whether they really are extinct, or, like Himalayan yetis, some are still surviving was a common question) to ferocious Tasmanian devils, to its wild rivers and lakes such as Pedder, to the purity of the air and water, the profusion of stone houses... the list goes on. Given that only five per cent of Tasmanian wine is exported, and that its total production is one per cent of the national crush, its future growth will be pulled by demand.

Pinot noir is Tasmania’s calling card, providing 44 per cent of its 2020 crush, well in front of chardonnay with 27 per cent. Impressive though they may be, they aren’t as striking as that for sparkling wine, which accounted for 40 per cent of the total 2020 crush. House of Arras is the big name, in volume, price and world-class quality, but there is an ever-increasing list of first-class sparkling wines from Tasmania. Virtually all use the traditional method and have extended time on tirage. At the risk of stating the obvious, these wines are overwhelmingly made from a pinot noir and/or chardonnay base, pinot meunier 2.1 per cent of the Tasmanian crush. 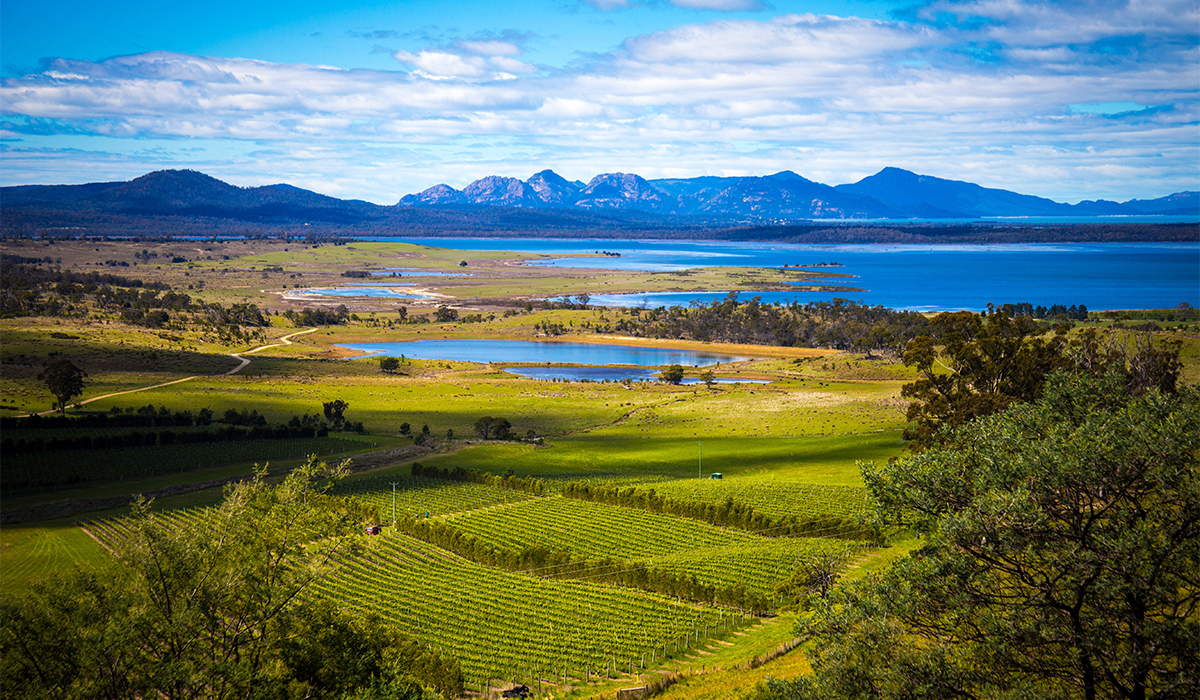 Freycinet Vineyard is just one of the stunning wine-growing sites across Tasmania.

Claudio Radenti’s vintage sparkling wines were always superb, and his move to non-vintage hasn’t hurt the style. If anything, it’s been a win-win scenario, making the wine more available, no less complex and priced lower. In a game of vinous chess, the Pirie brand is owned by Tamar Ridge, which, in turn, is owned by Brown Brothers – also with a long record of sparkling wine success with their Patricia. The 2012 and 2013 Pirie vintage wines are everything one would hope for, Andrew Pirie now making the high-class Apogee sparkling wines in Pipers River, not far from where he founded Pipers Brook Vineyard way back in 1974.

But it was the 2018 pinot noir class of 60 wines that lit the fire with five gold, 18 silver and 24 bronze medals. The top gold went to Bangor Captain Spotswood and Home Hill. The judges commented: “An outstanding class of young pinot noirs... we found lighter, finer aromatic wines of elegance and charm, as well as richer, darker black cherry styles, and many other legitimate styles.” A rule of thumb across all shows suggests a 33 per cent medal success is par for the course; here it was 78 per cent.

The 27 medals represented another freakish success rate of 73 per cent, and it didn’t end there. The ‘2016 vintage and older’ class of 26 wines was only an eyelash behind its 2018 sibling with a 77 per cent success rate, Six Friends achieving a rare double with its top gold in this class, securing the trophy for Pinot Noir Producer of the Year, Bangor Captain Spotswood winning Champion Wine of Show.

It’s worth stressing these very high success rates were not the result of largesse by the judges, headed by chairman Huon Hooke, who doesn’t run a children’s birthday party with every child receiving a prize. That said, he awarded the Chairman’s Trophy to 2015 Home Hill Estate Pinot Noir, an award open to every wine in the show. 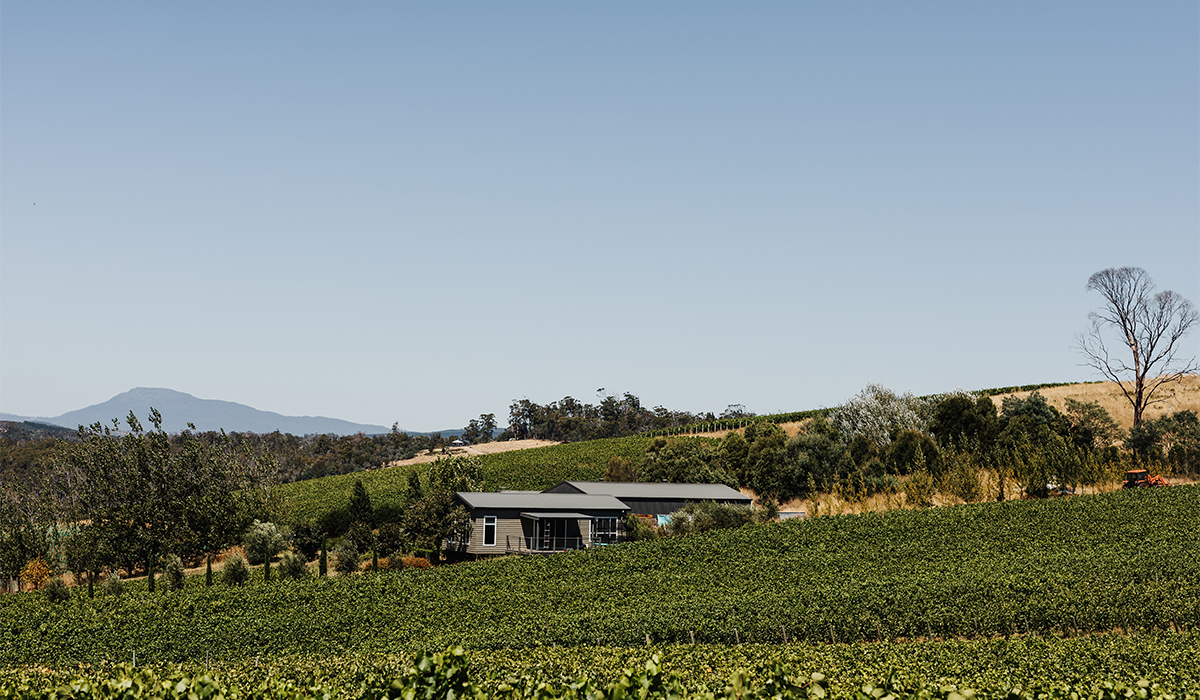 The vines at Sinapius, where Linda Morice is continuing the work of her late husband, Vaughn Dell.

One absentee from the show was Sinapius, following the sudden death in May of 39-year-old winemaker Vaughn Dell, co-founder of the winery with partner Linda Morice. The 2020 vintage was only part completed, and Linda, with their young daughters Esme and Clem, was thrown in the deep end. Local winemakers came to the rescue and a nationwide fundraiser helped deal with the multi-level challenges she faced. Two winemakers, each with their own businesses, took on executive consultation roles. Peter Dredge of Dr Edge was building his own winery, but oversaw the task of getting the newly fermented wines to barrel and continues to provide advice. Joe Holyman of Stoney Rise took responsibility for dealing with the vineyard, part ultra-close planted, and was also on hand to help in the winery.

Looking back over the past six months, Linda says it’s been a continuous process of upskilling so she can progressively make and implement the decisions, ultimately without outside help. She also has a web of support from the Tamar Valley Wines Group, which organised a weekend working bee to pull off the canes that had already been cut under Joe Holyman’s direction and wrap down the fruiting canes on the foliage wire.

The vineyard is in fine condition, rain – not the drought of 2019-20 – the driver. The critical flowering is still to come, but there are no reasons for concern. The 2019 vintage wines are now ready for bottling. This is where Wines of Tasmania comes in.

Its five directors are Fran Austin (Delamere), Fiona Weller (Moores Hill), Linda Morice (Sinapius), Bec Duffy (Holm Oak) and Katrina Myburgh (Wines of Tasmania). It was born last September out of Covid and Tasmania’s closed borders causing the close-down of the all-important direct-to-consumer sales route. Sinapius has long since sold out of its pinot noir, which is why they are anxious to bottle the 2019 portfolio. Its other wines will have sold out by the time this article appears. They are among the very best of Tasmania’s bountiful parade of exceptional wines, wineries and winemakers.

This is an edited extract from issue #56 of Halliday magazine. Become a member and enjoy digital access.